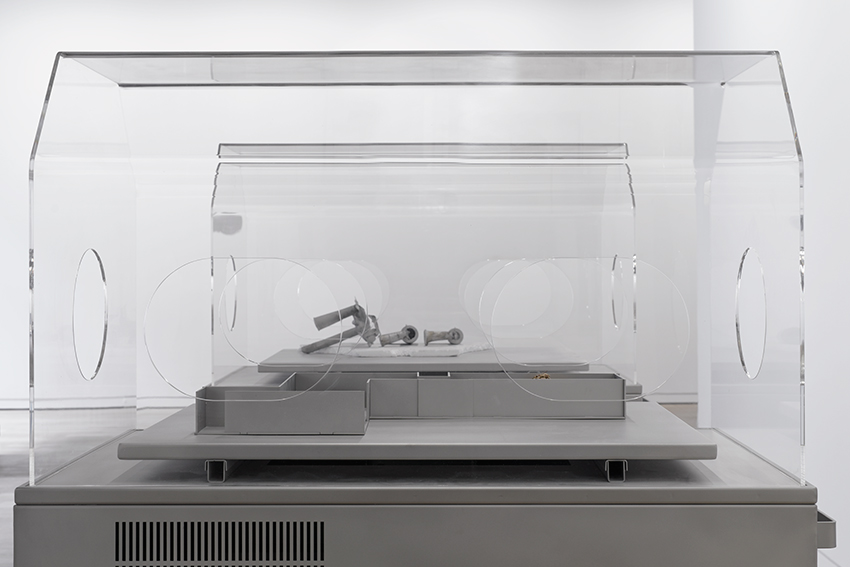 ‘It flushed you out against your will and projected you on bright screens,’ I heard a resounding child’s voice recite upon entering Tarik Kiswanson’s exhibition ‘Come, Come, Come of Age’ at the Fondation d’entreprise Ricard. Conceived as a sonic-sculptural installation, this show grew out of an unexpected collaboration. While casting children for an upcoming performance at Lafayette Anticipations, the Swedish-Palestinian artist and writer, who lives between Paris and Amman, met Vadim, an 11-year-old Romanian, French and American boy. Because they both shared a conflicting sense of self due to their multiple linguistic and cultural affiliations, Kiswanson decided to capture what he refers to as his and Vadim’s ‘hybrid voices’. Numerous recording sessions resulted in the sound installation Vadim (all works 2018).

Taking the loose form of a rather sibylline interview in English, Vadim poetically touches upon a number of existential questions: how does it feel to be born, to breath, to see, to move? And implied within them all, what can it possibly mean to come of age for someone whose identity is forever splintered by a history of exile and migration? As a first-generation immigrant whose parents fled Jerusalem before he was born, Kiswanson openly talks about the crushing sensation of belonging nowhere. ‘What can the individual do when he feels filiation with neither one culture nor the other, in my case Arabic and European: he sits down, thinks about those worlds, and starts making a world of his own,’ he told me.

The artist’s poetic dialogue with a child runs on a 25-minute-long loop from four speakers that are embedded within the walls. Constantly moving from one wall to another across the entire exhibition space, their haunting and sometimes overlapping voices pull the viewer in different directions. This sense of disorientation and discordance finds a solid echo in five stainless steel sculptures, titled ‘Mother Forms’. They represent hyperrealistic, yet non-functional incubators. Three of the sculptures are paired with empty or soldered-shut filing cabinets. Together, they evoke clinical and bureaucratic definitions of life: from the moment we are born, we start generating a trail of administrative papers that follows us until we die. The neonatal units aren’t large enough to contain, let alone nurture, the imposing metallic filing cabinets. The tense spectacle of an impossible fusion unfolds from one piece to the next, each displaying a different configuration. For example, two of the filing cabinets precariously lie on top and over the edge of their respective incubators – one threatening to fall heavily on the floor, the other to break the apparatus’ fragile, transparent lid.

Édouard Glissant’s concept of identity as constructed in relation rather than isolation, put forth in his 1990 Poetics of Relation, is crucial to understanding Kiswanson’s work. Like his own personhood, the artist’s aesthetic relies on cultural encounters, interferences and, at times, violent clashes. His world is one of juxtaposition rather than fusion. ‘It’s multiplying, becoming something more,’ we hear Kiswanson say in the sound installation. In this light, the puzzling view of filing cabinets seemingly forcing themselves into various incubators offers a powerful metaphor for how building identity through numerous dislocations may be experienced.

Standing alone in the back of the gallery, another sculpture further illustrates the artist’s notion of hybridity. Birth represents a life-sized young boy. It is modelled after an old wooden mannequin, which the artist found in a flea market in London. After bringing the mannequin back to Paris, he dismantled it, sent the parts to different foundries to be cast in bronze, and re-assembled it. While the resulting figure looks like it could have come out of Kiswanson’s incubators, it finally gives a composite body to his and Vadim’s hybrid voices.