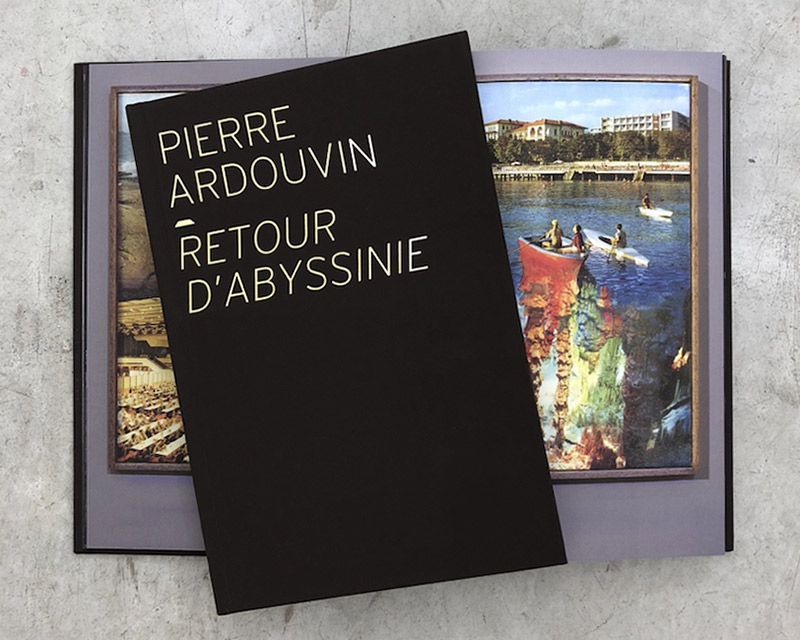 Prehistoric man has only left us truncated messages. He may have placed a pebble on the ground at the end of a lengthy ritual, during which he offered a roasted bison’s liver on a bark platter painted with ocher. The gestures, the words, the liver and the platter are all gone; as for the pebble, barring a miracle we won’t distinguish it from the other surrounding stones.

Under an Abyssal Skin

Plunged into semidarkness from the derelict counters to the labyrinthine vault of the former Bank of France’s branch in Béthune, Pierre Ardouvin’s exhibition revolves around the eponymous sculpture Retour d’Abyssinie (Return from Abyssinia, 2017). This work touches upon the divergent fates of two outcast geniuses in the late nineteenth century, namely: the poète maudit Arthur Rimbaud, who abandoned writing at the early age of twenty to eventually become a trader and explorer in the Horn of Africa, and the postman Ferdinand Cheval, who spent thirty-three years building his Palais idéal (1879-1912) in the garden of his house in Hauterives. While the latter never left his native countryside, his exuberant palace was inspired by exotic wonders from all over the world, which he discovered on his daily mail round through the nascent postcard industry and the very first illustrated magazines of the time. Resembling a mysterious altar at first glance, a scale model of Cheval’s chimeric architecture is installed on a life-size reproduction of the humble wooden stretcher, which Rimbaud designed after developing bone cancer in the spring of 1891. Paralyzed with pain, he hired sixteen porters to carry him from Harar in the middle of Abyssinia (now Ethiopia) to the port of Zeila (Somalia), 250 miles away, where he boarded a ship of the Messageries maritimes (a French sea postal company) to unsuccessfully seek treatment in Aden (Yemen), and then Marseille, his final destination.

As luck would have it, whereas the incredible paths of these two French demiurges never actually crossed, the account of Rimbaud’s last expedition gloomily echoes that of Cheval’s imaginary odyssey. The postman was the first to report in his notebooks the trivial incident that awoke an architect in him while working on the 19th of April 1879: ‘My foot tripped over a stone that almost made me fall. I wanted to know what it was. It was a stumbling rock of such an unusual shape that I kept it in my pocket to admire it at my ease.’[2] From that day forward, he brought a wheelbarrow along with his heavy mailbag to collect strange pebbles on the road and, one stone after the other, make his monumental dream come true: ‘I said to myself: since nature wants to do the sculpture, I will do the masonry and the architecture.’[3] On the 7th of April 1891, seven months before his death, Rimbaud also started documenting in a journal his ultimate journey, which immediately turned into a true season in hell: ‘Descent from Egon to Ballawa very difficult for the porters, who stumble on every stone, and for me, who nearly tip over each time. The stretcher is already half-dislocated and the servants completely spent.’[4] Three days later, heavy rain blocked the worn out procession without shelter or food for sixteen hours straight: ‘I passed the time under an Abyssinian skin,’[5] he lamented.

Digressing aside, I also tripped upon entering Ardouvin’s exhibition, but it wasn’t over a stone. It was over shiny pieces of junk jewelry, the kind that can be found in souvenir gift shops between baubles and postcards. Altogether they form here an unavoidable trinity of kitsch, which happens to be to the artist’s uncanny display what hypothetic pebbles, livers and platters may be to unfathomable prehistoric religions, that is, ‘truncated messages’ according to the French paleoanthropologist André Leroi-Gourhan quoted as a preamble to this essay. Since the early 1990s, Ardouvin has made of both popular culture and consumer society the touchstones of his fantastic aesthetics, which seemingly transforms the familiar into the occult. So I said to myself: if he wants to orchestrate yet another obscure ritual, I will come up with whimsical gestures and words for it. Thus my initiation began by nearly falling, only to discover a glistening deluge of cheap trinkets before my eyes. Conveying the unreal feel of a waking dream or nightmare, the in situ installation Au réveil il était midi (Upon waking it was noon, 2017) stages the most bizarre failed hold-up. Accompanied with a faint sound recording of rushing water, fake gems overflow the entire show from old safe deposit boxes left cracked open in the basement.

This disquieting yet playful amateurish robbery finds an even more absurd outcome in the work La tête en bas (Upside down, 2017). Installed between the desolate counters and Ardouvin’s ideal altar, it consists of a long makeshift rope made out of similar jewels suspended from the ceiling. The enlargement of a black and white engraving is printed on a carpet underneath. Coming from the French speleologist Édouard-Alfred Martel’s book Les abîmes (1894), this image represents the precipitous mouth of the Padirac Chasm from the pit’s bottom, hundreds of feet below. Not unlike this exhibition, it conceals an underground river and perhaps a buried treasure according to a local legend. For the viewers bending over the giant textile hole to plot their make-believe escape, the perspective feels completely turned inside out. Hanging against the surrounding walls, the thick velvet curtains of five works from the series La nuit n’est pas finie (The night isn’t over, 2017) also reproduce enlarged color photographs of majestic stalactites and subterranean streams. Under these abyssal rather than Abyssinian skins, greyish casts of feet recall the ghostly aura of tomb effigies. Finally on the same floor, but in a side-lighted room, twelve surreal compositions from the series L’inquiétude des jours heureux (The uneasiness of happy days, 2017) artfully threaten the everyday to collapse. Enlarged vintage 1950s postcards representing uneventful scenes of mass tourism are juxtaposed with spectacular pictures of caves, cliffs and stormy seas. Each dystopian fate is sealed with subtle touches of paint, as well as an enchanting mixture of resin and glitter.

The exploration continues in the former bank’s depths, where Ardouvin’s unsteady universe further dissolves, starting with A lot of fiction is intensely nostalgic and The story makes no sense. Very disappointed from the series Citations (2014). They consist of plastic toys (some animal figurines, a rubber ring, a model train and a doll house), which the artist slightly melted into one another using a soldering iron before adorning them with rhinestones. Mounted on small-mirrored rotating display stands, these two grotesque assemblages evoke deliquescent carousels and create in the dark eerie plays of light and shadow. Three wall sculptures from the series Éclair (Lightning, 2007) also bring to mind fairground attractions. Cabochon bulbs electrify the spooky maze-like archives like blinding bolts of lightning striking a carnival. Yet, the installation Jour de France (French day, 2012), named after a 1950s celebrity magazine that was sent for free to every dentist and general practitioner of the country, is perhaps what gave me the most goose bumps. Three mediocre chairs and a sticky coffee table are left at the tired viewers’ disposal in a sordid waiting room, whose stale walls are covered with viscous trickles of resin as if the architecture itself was lamenting. Finally, Les larmes d’Oum Kalsoum (Umm Kulthum’s tears, 1998) poetically turns an inflatable pool into an exotic patio fountain. The continuous sound of running water mixes here with the bewitching chant of the famous Egyptian singer, who was dubbed as “The Star of the Orient.” Ardouvin’s exhibition thus coming full circle, and my initiation to an end, his fanciful ceremonial remains shrouded in mystery.

“The nethermost caverns,” wrote the mad Arab, “are not for the fathoming of eyes that see.”