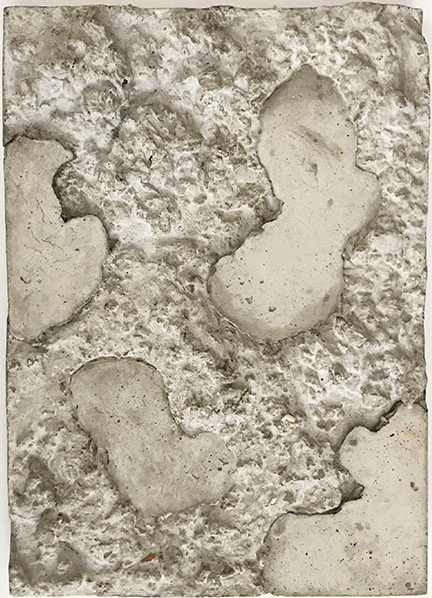 For anyone already familiar with Benjamin Sabatier’s wicked ready-to-be-made aesthetics halfway between art and bricolage, the collages that punctuate Concrete Variations – his third solo show at Bertrand Grimont – may strike as plain odd at first. From afar, they look like large dripping watercolours: abstract pastel landscapes, which are all the more unexpected that the artist’s praxis has consistently revolved around exhibiting labour since the early 2000s, notably through his resorting to manual work and construction tools.

Presented along with a recent and more characteristic ensemble of assemblages and sculptures, Sabatier’s collages – simply numbered (2018) – actually consist in shredded pieces of industrially-coloured sheets that the artist glued together with wallpaper adhesive onto canvasses, and further covered with Indian ink using a sponge. Once both preliminary steps over and done with, each of these compositions was thoroughly rinsed, before their grimed pasty substance could finally dry into what it has (understand on its own).

In other words, by the sweat of a sponge rather than the artist’s brow, the process is resolutely at work here. It manifests a discreet yet radical shift from the DIY – or Do it yourself – ethic of self-sufficiency, which has fed Sabatier’s deep engagement in the creative emancipation of viewers for the past twenty years, to the notion of auto-construction that has come to renew his practice in depth.

This subtle transition towards his work’s self-realisation is somewhat prefigured in the almost introspective twist, which the artist’s imposing floor assemblages and small wall sculptures have lately undergone: namely, a drastic refining of their materiology now essentially reduced to concrete, wood and paper (Sabatier thus leaving, or so it seems, his earlier, more baroque and discordant accumulations of tools, raw materials and consumer waste behind).

At the gallery, Sans titre (seau I) (2018) discloses the concrete internal cast of a spilt bucket pouring itself out all over the floor, and quite a moving instance of what we may once and for all coin here as construction neo-formalism. Further on a wall, Sans titre (restes 01) (2019) may as well be the most literal variation on display, for which waste from the aforementioned collages (whose paper actually comes from the artist’s Pallets realised in 2004) were poured into concrete so that to form a new icon.

Finally, Claude Viallat’s signature leitmotif – a sponge, again – miraculously emerges from Sans titre (variations 01) (2019), another wall sculpture which plays on different textures of concrete. More than a lucky nod to Supports/Surfaces, it is a real homage that Sabatier pays to this French avant-garde, whose legacy he has always openly claimed at the crossroads with Informel.

The artist’s unwavering experimentation, which consists in creating new modules after earlier works through their systematic recycling or summoning, has thus now embarked onto a curious psychoanalysis, in the course of which contents, containers, materials and tools may eventually become one, minimalist and almighty.