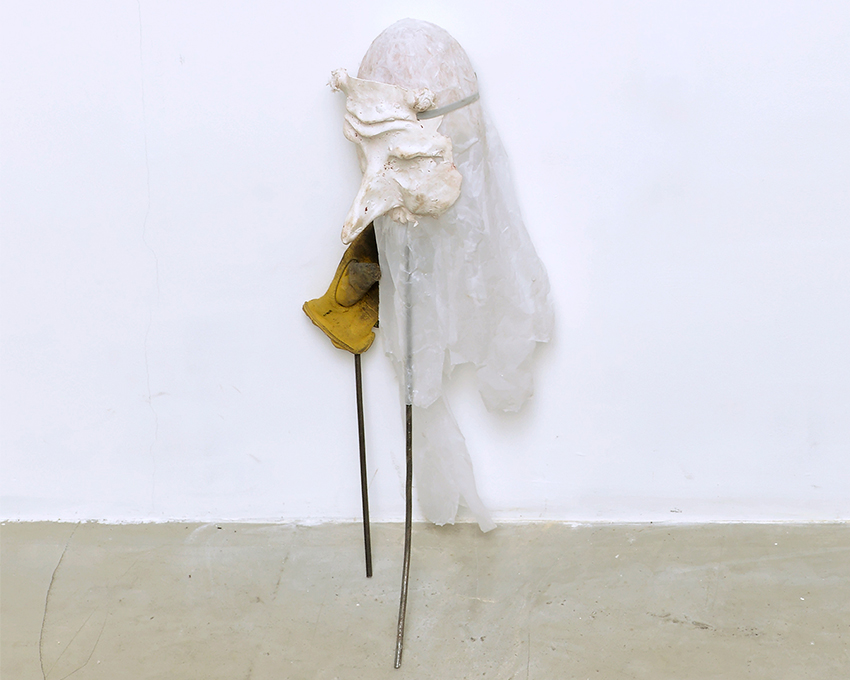 Pone seram, cohibe. Sed quis custodiet ipsos custodes? cauta est, et ab illis incipit uxor. Around the turn of the second century, the Roman poet Juvenal wrote what is possibly the most misogynistic piece I’ve ever read, Satire VI, a diatribe against women and their supposedly innate perfidiousness, addressed to a certain Postumus in order to dissuade him from marriage. Exquisitely cynical, the verse literally translates into: ‘Lock her up, constrain her! But who will watch the guards? ’ The question alone has since become a common Latin phrase, used to point out the corruptibility of anyone placed in a position of power, and therefore the impossibility of so-called guardians of morality it on others. Yet the overall context of gender bias from which the question originated is typically ignored. Now, not that this quote appears anywhere in Jesse Darling’s first solo show at Sultana, I believe it perfectly sums up the premise driving the otherwise subversively feminist and perhaps gender-fluid harlequinade at play here.

More than a display of artworks, Armes Blanches (meaning ‘cold weapons’) comes across as some kind of theatrical improvisation involving a troupe of the debris of an air disaster, albeit a playful one. Indeed, for Planes (all works 2017) the British artist has flown and discreetly crashed little aluminium foil aeroplanes into the corners of the narrow exhibition space, which in his aesthetics may as well stand for the decline of modernity’s inequitable duality. Hanging centre-stage on the wall and overlooking this whimsical apocalyptic scene, the devilish red half-mask Silicone Pantalone invokes the eponymous commedia dell’arte character: a greedy, crooked old fool, merchant and butt of all jokes in the harlequinade genre. Against his will and his penny-pinching values, yet right under his hooked nose and prominent eyebrows, The 1st Lady completes the expected farce: what can only be Pantalone’s disobedient daughter Columbine is surreptitiously eloping with Harlequin – not a guard per se, but certainly a servant. These ‘figures’, though, fixed on steel pipes leaning against the wall, are quite abstract: Columbine is represented by a paper wedding veil, her beloved trickster by a used and dirty work glove that caresses (or delicately soils) her. Darling, here, decisively draws a parallel between feminism and class warfare, one that more or less subtly but always humorously transpires through the rest of the show and the timeless sexist clichés it addresses.

For instance, the steel-tubing sculpture Ass Priest, which wears among other items a medical latex glove, further embodies this dual notion of womanhood and labour – but on all fours, as it brandishes not a cold weapon as the exhibition’s title would suggest but an adorable pink foetus. Next to this grotesque self-delivery, the mop-headed Watcher 1 cheerfully cleans the bay window, which makes the entire length of the gallery visible to the street. Closer to the entrance, Watcher 3 seems to frantically wave paper disposal bags for sanitary pads, perhaps in order to lure passersby into the bawdy show. From the little I have read about Darling, who publicly identifies as trans-masculine, art critics are quick to perceive his works as inherently queer. While some of these works may revolve around the notion of queerness, this particular exhibition conveys a feminist point of view. However, what current transgender and feminist fights have in common is that they both defend the right and freedom to live a new identity, one that falls outside the heterosexual mainstream or those biased societal roles and prospects it restrictively assigns each of us at birth. Strongly believing in that aforesaid autonomy, I didn’t experience in the least Armes Blanches as inevitably queer, just as I assume readers won’t necessarily perceive this exhibition review as merely feminine. Quite frankly, if they did, it would seriously get on my tits, as ironic that may be. So as long as there is humour, let’s fight on!