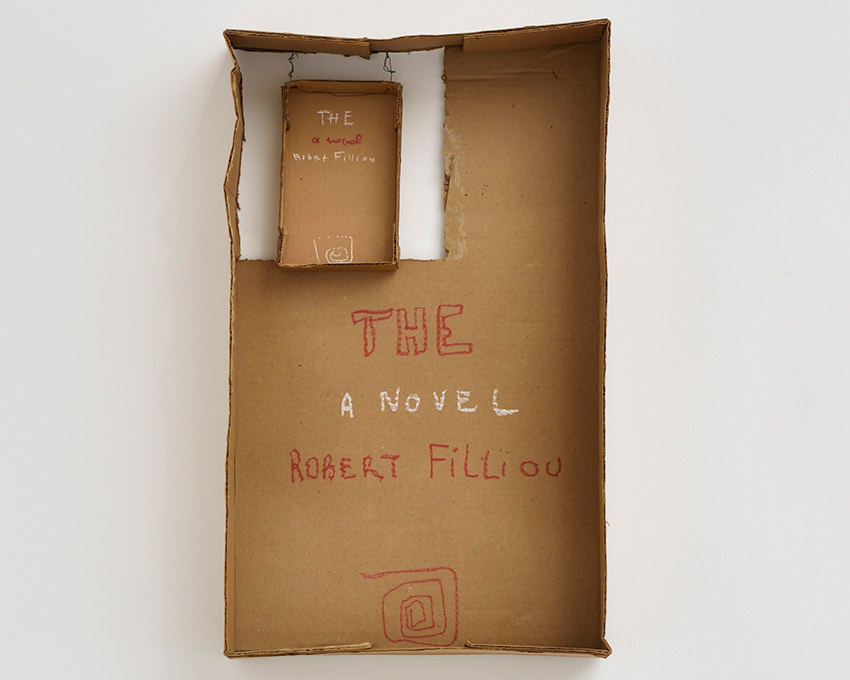 Wandering through Pure Fiction, one quickly realises that no story connects the 30 works displayed over the gallery’s two floors. Aesthetically, the exhibition is as heterogeneous as its group of 11 artists, namely Henri Michaux, Pierre Klossowski, Marcel Broodthaers, Robert Filliou, Giuseppe Penone, Josef Strau, Lili Reynaud-Dewar, Michael Dean, Ed Atkins, Win McCarthy and Bunny Rogers. What they have in common is merely biographical: all the artists have written books, which is presented as an instance of leading ‘a double life’, although one might rightfully argue that writing isn’t a dirty secret, contrary to other possible penchants. Anyway, alongside the artworks, a collection of 26 books – ranging from poetry to novels – is available for the viewers to leaf through, whereas the press release specifies that ‘no work in this exhibition is required reading’, further stating that each on its own is ‘pure fiction for the imagination’. So rather than considering the artists’ books for my next reading group, I chose to summon the ‘power of their visual languages instead’ and thus hopefully come up with a storyline otherwise lacking here.

Hanging at the entrance, The, A Novel, Robert Filliou (c. 1976) provides the perfect metaphor for the task at hand. It consists of a shallow cardboard box, on which is handwritten the work’s title, and which only contains a smaller copy of itself, a conceptual mise en abyme ready to receive the viewer’s imagination – or a novel within the novel, figuratively speaking. After all, as Marcel Duchamp said, the beholder completes the picture; but figuring out a story for the overall show isn’t that easy. Broodthaers’s pastel drawing Le Motif (1973), which simply represents a painter’s palette, sums up the problem: the exhibition’s motif has yet to be composed. I found myself almost immediately hopeless, while contemplating McCarthy’s Always these few raindrops and/never the storm/always a partial view (Winnie’s view 28–30) (2015), a picture of the artist’s eye inside a tear-shaped piece of glass surrealistically leaking from a pipe fixed to the wall, whereas Dean’s X (Working Title) (2015), a human-sized, X-shaped sculpture covered with fat, red, concrete tongues, triggers thoughts about speaking in tongues. Divine inspiration would certainly help the beholder here.

Walking down the stairs, I’m distracted by a long white ribbon which Rogers attached to the first floor’s handrail, and which falls straight to the basement. It nearly causes me to stumble on the same artist’s Jodie Doll (Blue) (2016). Naturally I plan to strangle this creepy handmade doll (in a tale I’m titling Murder at MGG). Meanwhile, any thirst for blood is temporarily quenched by Reynaud-Dewar’s My epidemic (a body as public as a book can be) (2015), three huge theatrical white curtains, the bottom of which the artist dipped in red ink. Finally, while I despairingly consider resorting solely to personal ramblings like those legible on the giveaway posters Strau has provided, my gaze meets two wicked eyes – Penone’s mirrored contact lenses in his slide projection To reverse one’s eyes (Rovesciare i propri occhi) (1970), which stare at Atkins’ Untitled 3 (2014), a mixed-media panel inspired by Ouija boards. In the middle, a standalone sentence carved into a Plexiglas sheet offers the only possible conclusion to this tragic review: ‘Life is utterly miserable because of you personally,’ whom I believe to be this so-called curated show, while I’ve been torturing myself to find a fictive angle here. Although it brings exciting new faces to Marian Goodman, it sheds no light onto their unconnected works, and that’s a true story.