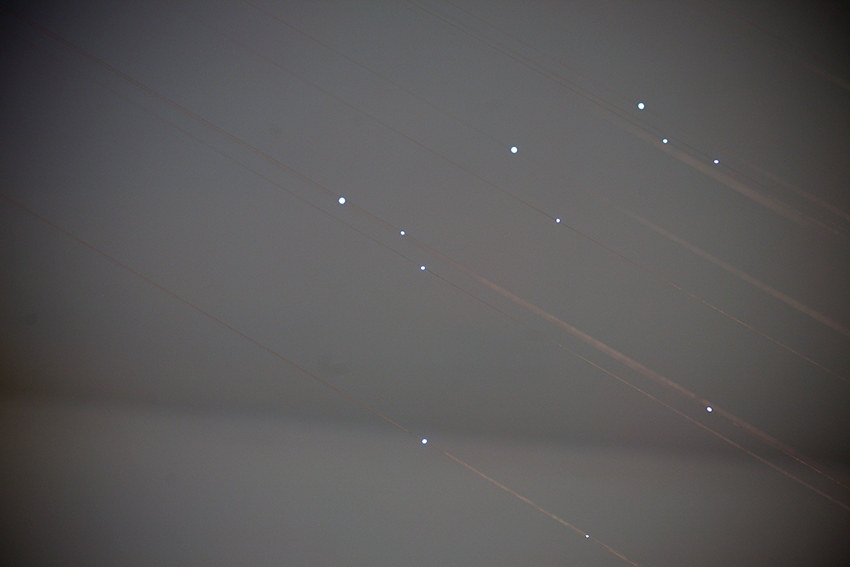 Like Perseus ages ago in pursuit of the Gorgon Medusa on the borders of Oceanus, Stéfane Perraud hasn’t returned empty-handed from his second expedition to Isotopia, a rocky and glacial Arctic island, which is incised from the Southwest to the Northeast by a narrow and crystalline valley known as Stability. The latter has notably been the object of numerous studies within the field of nuclear physics. Although very few researchers have actually dwelled on it, even less have ventured into the craggy and way more inhospitable heights that emerge from an electrifying blue mist on both sides of the valley. These wild reserves, where abnormally high levels of radioactivity have been recorded, abound with unstable isotopes, which are all the more redoubtable, as they are barely perceptible.

In fact, in the hope of capturing one of those elementary yet evanescent creatures, one has to be armed with patience. Likely to mutate into the same or a completely different atom at any time, they emit rays, to which you would be well advised not to expose, for there is no mirror or polished shield like Perseus’s that could surely protect you from them. If you believe that the monstrous Medusa with her snakes in place of hair was as terrifying as her gaze was petrifying, know that tracking unstable isotopes on the outskirts of the valley risks you to way worse evils than being turned to stone.

Proud of his fruitful hunt, the means of which he is careful not to entirely disclose, Stéfane Perraud exhibits at Galerie de Roussan not only one but three radioactive trophies, some of his traps, as well as maps of Isotopia and samples of crystals that he extracted on the island in the course of his excursion. Delicate specimens of Tritium (3H), Beryllium-10 (10Be) and Carbon-14 (14C) are enmeshed in the very toils that the artist stretched to catch the uncatchable. But don’t let yourself deceived by their radiant fragility. The artist’s vigilance and prudence made him seal the first two within little transparent boxes, saving you from the devouring and disastrous curiosity that made once Pandora open her jar. Suspended in the air at entrance of the gallery, the third isotope, the known instability of which is more predictable and very prised among archaeologists for its incredible dating power, presents a lesser danger for the viewers.

Many explorers found themselves bewitched by the transformative prowesses of these extraordinary creatures, which proliferate in Isotopia. Among them, physicists of course, who installed there a nuclear reactor, but also alchemists, who uncover in the tortuous detours of the island and its frequent landslides the labyrinth of their Magnum Opus or the possible transmutation of lead into gold. On the detail of a map, Stéfane Perraud has meticulously drawn the ideal journey of the gold digger or all the paths that lead to the precious element. Landslide after landslide, atomic mutation after atomic mutation, from an unstable isotope to an entirely different substance, the mystery of the island remains complete to this day. For those tempted to unravel it, the new initiatory guide written by the Isotopia specialist Aram Kebabdjian, La chasse aux isotopes, is a prerequisite.