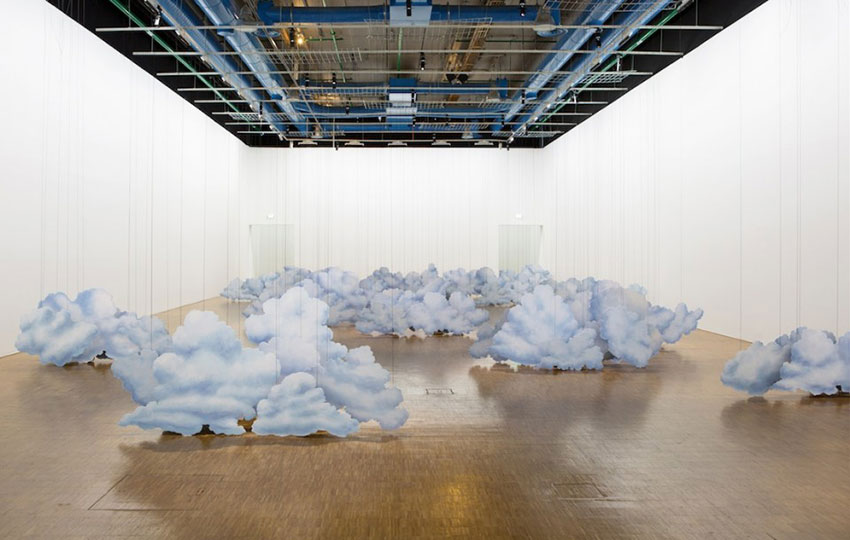 Suddenly I, Latifa Echakhch, first generation immigrant so to speak since I arrived so young in France, was nominated for the Prix Marcel Duchamp, rewarded and invited to exhibit in one of the most important cultural institutions, the Centre Pompidou. Though in the end it is the ultimate recognition from the French art scene, the experience was really disturbing for me, because it reminded me of what I hated within sports, the competition applied to the arts. Also I couldn’t ignore that somewhere in this process there was this little part of me that was looked at, I as an alien. With another name, I wouldn’t feel the same pressure and I wouldn’t carry the same weight.

In Search of Lost Time: The Little Madeleines of Latifa Echakhch

Only the fourth woman to win the Prix Marcel Duchamp, France’s most prestigious award for contemporary art, since its creation in 2000, Latifa Echakhch was born in El Khnansa, Morocco, with a very humble background, about which she has always remained very reserved. She was only three years old when her parents moved to France and settled in Aix-les-Bains on the shore of Lake Bourget. A Romantic landscape par excellence, this is where, in 1816, Alphonse de Lamartine met his muse Julie Charles, who passed a year later, and which became the scenery of his famous 1820 poem Le Lac, in remembrance of their love and flâneries:

Thus ever drawn toward far shores uncharted,
Into eternal darkness borne away,
May we not ever on Time’s sea, unthwarted,
Cast anchor for a day?

The Alpine region has had a deep impact in shaping the sensibility and aesthetics of Echakhch, who, after having been to Paris and Stockholm for several years, has now returned ’home‘: she currently lives in Martigny in the Swiss Alps. She describes herself as a Romantic at heart, and her works, halfway between Conceptualism and Surrealism, and often taking the form of installations and compositions of found objects, might indeed be abstracted as Romantic readymades, for they emphasise imagination, emotion and introspection.

When presented with the award in October 2013 and in consultation with Bernard Blistène, who was just appointed Director of Centre Pompidou, Echakhch faced two options for her upcoming exhibition at the institution’s Espace 315. The first would have been the easy one: creating a single spectacular installation But instead she opted for something more difficult and courageous, confronting herself with her own history and childhood memories – what she describes, when we discuss her upcoming exhibition, as her “very poor cultural heritage” – and in doing so, perhaps she somehow sets the record straight in terms of the predictable clichés surrounding her ‘origins’. After all, she confesses, she never owned anything that could be characterised in cultural terms as being ‘oriental’ and speaks Arabic like a toddler, though she wishes to master it one day through writing poetry.

For us to travel back in time with her, Echakhch has conceived her show like a landscape, which will unfold as the visitors stroll within the vast, rectangular, 315sqm exhibition space. Upon entering, the first view will be of the reverse side of a theatrical set: the uneven black versos and frameworks of one hundred very thin wooden cutouts representing clouds and suspended from the ceiling on almost invisible threads all the way to the floor that they will touch (in other words the viewers will come in from behind the scene). Each ‘cloud’ is approximately one metre high, though all differ in shape and size, these will be arranged in small herds of five across the length of the room, which will cause the visitors to slalom between them and, intentionally or not, make the airy props waver slightly. The parquet, meanwhile, will be thoroughly polished in order to reflect the entire decor: “I wanted to give the impression of a quiet lake mirroring the surrounding nature,” Echakhch says.

Reaching the far end of the room and finally being able to turn around and see the sculptures from the front, their other side painted in light blue, grey and white, viewers will discover, previously hidden by the clouds and placed on the floor, about 15 small, seemingly trivial objects that are just like some the artist remembers having owned in her youth and which hold a personal significance to her. Bought, gleaned or fabricated they include, for example, a preschool marionette, a collection of rocks and another of Bach records, a series of educational books Que Sais-je?, a Vallauris ceramic fish lamp, a pétanque set and a perfume bottle of ‘L’Air du Temps’ by Nina Ricci. Each of these objects will have been previously plunged into brilliant black ink, giving the impression that they might have just about survived a muddy tide in a basement, a way for her to “reactivate, unify and transcend the memories they contain”– little madeleines in search of lost time and, sometimes, a metaphorical springboard for a greater cultural remembrance than her own history.

Take ‘L’Air du Temps’ for instance, which is also the title of the exhibition (as well as a nod to Duchamp’s 1919 readymade Air de Paris): the scent was created in 1948, during the immediate aftermath of the Second World War and represents for Echakhch both a fresh breath after the horror of the events of recent history and a way to soothe the pain they left behind, like a balm. She filled the bottle with black ink and exhibited it for the first time this summer in the cabinet of art and curiosities of the Cathedral Museum in Salzburg. When doing so, she told me that she couldn’t help but think about Dvir Intrator, her gallerist in Tel Aviv, whose family, originally from Austria, suffered deportations and spoliations: “I know that Dvir would have a hard time going to Austria, so this perfume also evokes to me this sentiment, the refusal to return to one’s native country,” she recalls.

This anecdote brings me to the most essential trait of Echakhch’s character: her raw, overwhelming, political sensibility, which engages and enlightens her entire practice. While I was interviewing her in August, she told me about the time she was starting as a postgraduate at the École Nationale Supérieure des Beaux Arts in Lyon, between 2001 and 2002, during the height of the Second Intifada broke in the West Bank and Gaza: “It was really hard for me, as it is again since last July. I don’t know how I can allow myself to make art, only art, while there are such huge political impasses,” she says. As long as she can remember, the artist has always aspired to be politically involved, even during her schooltime career in sports, between the ages of fourteen and seventeen, when Jesse Owens as a role model, “because he was even more than a African-American athlete, he ran and won at the 1936 Berlin Olympics, he had a real political impact.” Later, as an freshman at the Ecole Supérieure d’Art in Grenoble, she joined the Mouvement des Jeunes Communistes de France (MJCF), a political youth organisation close to the French communist party, only to realise subsequently that it wasn’t open enough for her really to commit to it.

Instead her true moment of discovery came in 1996 when Philippe Parreno, her professor in Grenoble suggested that she investigates the work of the Cuban-born American artist Félix-González-Torres, who had that year an posthumous exhibition at Musée d’Art Moderne de la Ville de Paris (Girlfriend in a Coma). Recalling that moment, Echakhch states that “his balance between the political and the sensorial spoke to me so much that I felt everything was possible. I had found my way.” In these various respects, it doesn’t strike one as a surprise that the installation Echakhch has exhibited most often is titled For Each Stencil A Revolution (2007) after a quote from Yasser Arafat. Having been shown at the Tate Modern (Speakers’ Corner, 2007), Art Basel (Art Unlimited, 2010) or more recently the Hammer Museum (Hammer Projects, 2013) and the Palazzo Grassi (L’Illusion des lumières, 2014), the work consists in covering the walls of an entire exhibition room with blue carbon paper. An aggressive solvent is then sprayed all over it, causing the colour to deliquesce onto the ground as if erasing all the hopes and rebellions of the protesters who made the stencil their means of communication, at least before its relative obsolescence within the digital era.

Other examples of how Echakhch infuses her political sensibility into her art include Saïd’s Tea (2010), a gutter installed inside an exhibition space and able to collect rainwater in a teapot, which was first shown at Dvir gallery. The piece reproduces a gesture of Saïd, the artist’s uncle, which has always fascinated her. For having limited access to water supply in Khouribga, Morocco, he has a habit of putting a teapot under the gutter of his house to (hopefully) fill it with rain and then prepare his ‘special tea’. Installing this in Tel Aviv was for Echakhch an obvious reference to the War over Water, the battle between Israel and its Arab neighbours from 1964 to 1967 over control of the Jordan River and its available water sources. A year later, during a visit of Beirut, the artist noticed how red the earth was over there, which reminded her of an episode of What Have We Learned Charlie Brown?, based on John McCrae’s poem In Flanders Fields (1915). According to a legend mentioned in the cartoon, poppies were originally white, but were turned red by the blood of the First World War victims. As an echo to this metaphor and in respect of the 2006 Lebanon War, the artist sculpted Charlie Brown’s Poppies (2011), fragile flowers in clay mixed with the red earth of Beirut, which was first exhibited at the Beirut Art Center (The Beirut Experience). This is also in Beirut where she had the idea of Fantôme (2012), the sculpture of a ghost with a white shirt suspended on a floor standing hanger and a jasmine necklace, as an allusion to the Jasmine Revolution. She mounted it for the first time at Kamel Mennour gallery (Tkaf, 2012) and again, this year, at Palazzo Grassi. If not screaming out loud into the wind, at least figuratively whispering, for all the voices that are left unheard, yes, Latifa Echakhch’s Romantic art can stir up and inspire our political consciousness.