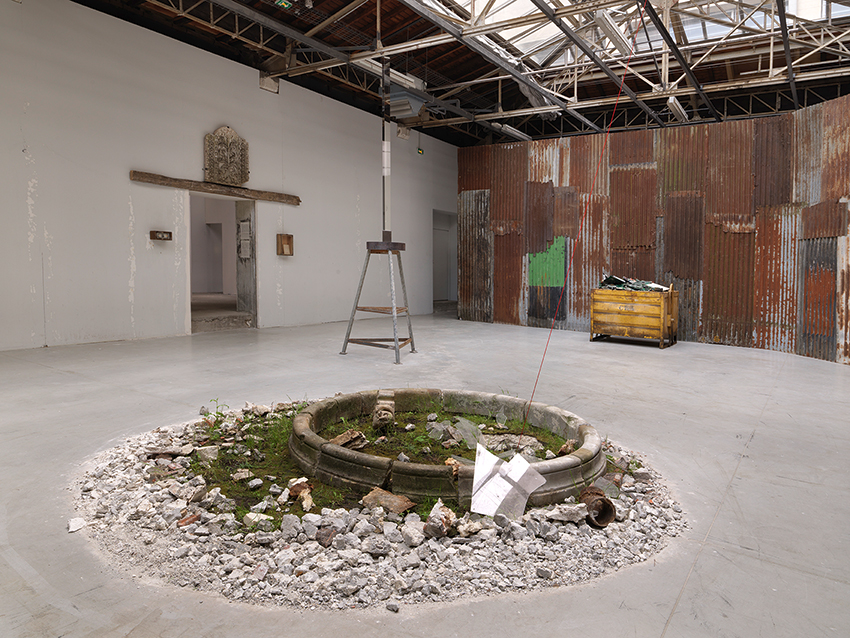 Mayday, mayday, mayday. ‘The world died today!… Imagining the worst conceivable tomorrows gives me tremendous pleasure,’ Hiroshi Sugimoto exults in the wall text that opens Aujourd’hui, le monde est mort [Lost Human Genetic Archive] at the Palais de Tokyo. This is the largest exhibition the acclaimed photographer has ever staged in Europe. Prophesying the imminent collapse of human civilisation, with only decaying capitalism, the last surviving ideology, still holding us up, he presents 33 apocalyptic scenarios narrating fictitious ends to the world from the points of view of their last witnesses, imaginary specialists (each with a name such as the Aesthete, the Escapist, etc) at the crossroads of art, science and religion. Scribbled on parchments or directly onto the walls (sometimes with such apparent haste that they are hard to decrypt), the tragic reports are chaotically scattered all over the exhibition space within a serpentine display of old relics and contemporary curios that the artist has gathered throughout his life. These range from million-year-old fossils and Neanderthal tools to Japanese antiquities and modern collectibles, such as 1960s cosmonauts’ hygiene kits, or ‘Space Fountains’, as he likes to call them – one of many references that Sugimoto makes to Marcel Duchamp within the show (in this instance via the latter’s Fountain, 1917).

With this unexpected ensemble of heteroclite objects, all of which materialise testimonies to fabled lost worlds, Sugimoto becomes the demiurge of a theatre that goes way beyond the frame of his photographs. Actually, just a tiny few of the latter are exhibited: some from his ongoing series Seascapes (1980–), which capture, in black-and-white, pure linear marine horizons; others from his series Lightning Fields (2009), which wasn’t produced with a camera but by a Van de Graaff generator that was used to apply an electrical charge directly onto film. While the dusty basement of the immense Palais de Tokyo already looks like a kind of ruin, the artist has installed his dark prophecies amid a maze of rusted metal sheeting and climbing ivy, which only adds to the sense that nature has reclaimed its territory from mankind. To add to the drama, no artificial light is used in the scenography. Rays of sunshine come into the exhibition through a glass roof supposedly shattered by a passing meteor that has left a gaping hole in the floor. It’s around this hole that the whole exhibition is orchestrated. If you dare risk your life and bend over it, you’ll see deep down into the Palais’ entrails a real fragment of the Gibeon meteorite from Namibia, which appears to have landed here and broken a toilet in half (yet another Fountain). At dusk visitors are handed torches. Absolutely thrilling.

Back to the memorandums left by the last men on earth: they are in fact entirely satirical, reflecting plausible concerns about current social and geopolitical issues – gender, virtual reality, wellbeing, authority, environment and so forth. Next to an eighteenth-century illustration of a hermaphrodite, the Aesthete reports that homoerotic love became the ultimate corrective to overpopulation; next to a 1952 edition of The Zen Doctrine of No Mind, by D.T. Suzuki, the Escapist recalls that while totally immersed in video gaming, the youngest generation reached satori (Buddhist enlightenment) and could no longer be bothered to make babies; next to a stuffed and prepared parrot, which sporadically transmits a computer-generated voice repeating “Rien de plus agréable que la mort” (“Nothing more enjoyable than death”), the Euthanasia Association Chairman reveals that the poor were urged to opt out by suicide, with governments providing a supply of lethal hallucinogenic drugs until, of course, everyone disappeared; next to a few tabloids headlining the Bill Clinton and Dominique Strauss-Kahn sex scandals, the Journalist deplores that after all political abuses had been exposed, no competent leader was left to govern, which precipitated the downfall of civilisation. Finally, after settling on the moon to escape life-threatening pollution, the Astronaut suffers depression and agonises over his fellow humans’ shit, which orbits the earth like Saturn’s rings. Having come full circle, I’d like to reassure you that the best is still to come – although Sugimoto’s sarcasms, as hilarious and grotesque as they are, don’t really seem that improbable, do they? After all, they only exaggerate everyday headlines…