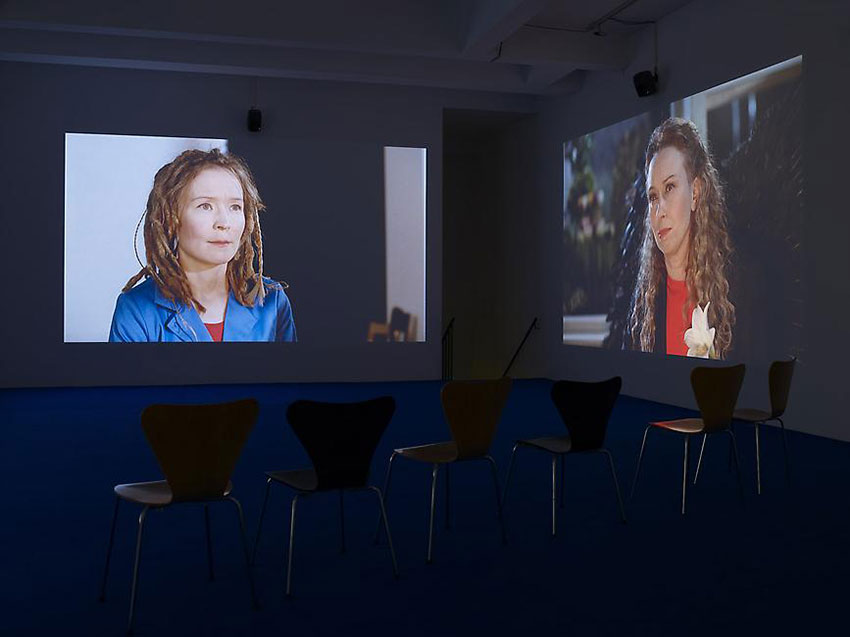 The nature of a miracle is at the core of Eija-Liisa Ahtila’s most recent film, The Annunciation (2010), a 33-minute, three-screen installation opportunely presented at Marian Goodman Gallery over the Christmas period. A textual quotation of Jakob von Uexküll’s concept of ‘Umwelt’ (German for ‘environment’) introduces the film and provides the grounding for the Finnish artist’s reflection upon the conditions that could allow us to comprehend an event as a miracle. While the German biologist and philosopher insisted on the coexistence (besides our human awareness) of innumerable understandings of the world(s), all simultaneously defined by each living species’ unique perception of our shared universe, Ahtila uses an exposure of filmic mechanics – from the screenplay to the screens themselves – to engage or proliferate different points of view that may help us to approach the miraculous through the ordinary. “Can something already familiar fulfill the criteria for a miracle?” the narrator’s voiceover asks as a prologue while, on screen, shots of ravens and bullfinches in the frosty landscape of Southern Finland follow one another.

Set in an artist’s studio and divided into three acts – the casting, the rehearsal, and the actual ‘play’ that are punctuated by many scans of late Middle Ages paintings and altarpieces depicting the Christian episode – Ahtila’s contemporary remake of the Annunciation symbolically challenges and breaks into three screens the singular point of view of Renaissance perspective. The parts (the Virgin Mary, the Archangel Gabriel, etc.) are distributed during the first act among nonprofessional actresses, who were cast from a Helsinki institute for women’s support services. It should be noted that the director of the play in Ahtila’s Annunciation is the only role attributed to a real comedian, Kati Outinen, known for her many appearances in the films of Finnish director Aki Kaurismäki, who favours of low-key acting. The three acts, which are based both on the artist’s screenplay and the nonprofessional actresses’ improvisation, confront us immediately with various interpretations of the miracle, depending on the intimate faith that each participant is free to act out.

The biblical Annunciation effectively functions as an encounter between two understandings of the world, the holy and the human (the question of faith being subsidiary). In Ahtila’s installation, the multiple projections and the exposure of various stages of production become a way to open onto another knowledge, outside our private beliefs, but also outside our shared history and culture (what von Uexküll would call our limited human seizing of the world, which is symbolized in Ahtila’s piece by the unique perspective of Renaissance imagery throughout the whole film). Amid all these points of view, we find ourselves wondering if experiencing the unfamiliar in the familiar could be the key to the miraculous (or at least its sentiment). It’s a reminder that Ahtila is a major force within a generation of artists who question the means of common narrative structures, from documentary to fiction, in order to comprehend more clearly the constitution of our collective psyche.