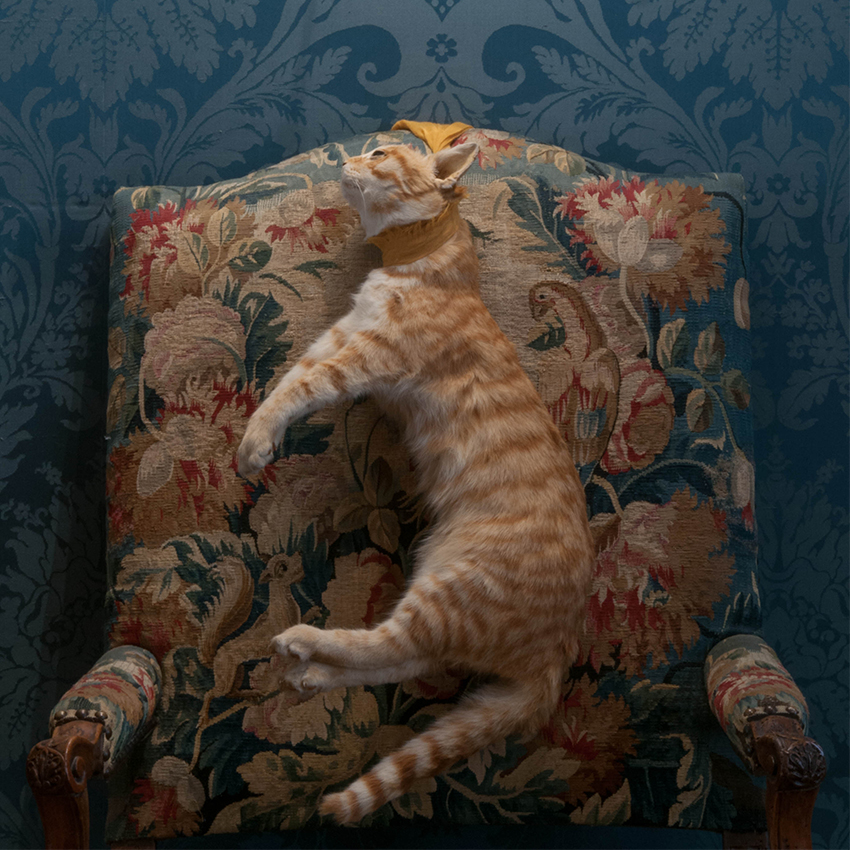 Last year, Sophie Calle received a very unusual request, something relatively usual for her. She was invited to take over the Musée de la Chasse et de la Nature, an exquisitely bizarre private museum dedicated to hunting, containing eclectic collections of historical and contemporary artworks, trophies, guns and other curios. She brought along some of her entourage: a dozen mounted animals from her own collection, and her sculptor friend Serena Carone. Rest assured that the latter isn’t stuffed, although she has an immobile equivalent in Calle’s menagerie: the French conceptualist, whose narrative practice revolves around kooky relationships and chance encounters, owns over a hundred preserved creatures, named after friends and family.

Calle (and Carone)’s exhibition, whose title translates as Nice doubled shot, sir!, begins in on the museum’s first floor, where the wall text Mes morts (My dead ones, 2017) discloses further information about her special ‘pets’. In her will, the artist has bequeathed her friends their respective beasts, but for those whose dedicatees didn’t survive her, she’s thinking of taking their animals to the grave. The showstopper Deuil pour deuil (A death for a death, 2017) gives a splendid idea of what her dream mausoleum may look like. A lifesize recumbent statue, made in glazed ceramic by Carone, represents Calle in fancy flowered dress and mourning veil, surrounded by animals including a giraffe for her mother Monique, a tiger for her father Bob, and a baby zebra for her cat Souris. Most of the artworks on this floor are concerned with Calle’s current grief over the latter two. In Le fantôme de Souris (Souris’s ghost, 2017), a framed text overhanging a photograph of her cat on her bed, she puts her sorrow into perspective by observing that at least she doesn’t fall asleep with her father’s ghost between her pillows every night..

The exhibition continues upstairs in a maze of heavily decorated rooms and alcoves. Thirty-eight undated, autobiographical anecdotes from Calle’s ongoing series True Stories (1998–) are artfully camouflaged – for viewers to hunt – in kitschy frames representing bear cubs, dears, stags, partridges, etc. Personal belongings (eg lingerie, more carcasses) are spread around to illustrate these memories, whereas Carone’s weird, mix-media animal sculptures simply fit too well within the museum’s collections. In one work from True Stories, Les chats (The cats), Calle recalls three cats preceding Souris. One met a tragic end: an ex-boyfriend asked her to choose between sleeping with him or her pet. She chose the cat, he strangled it – nearby, a poor stuffed kitty hangs from a scarf attached to a floral upholstered armchair. Murder aside, the most perplexing thing is that in another extract, Chambre avec vue (Room with a view), Calle remembers having had no problem sharing her makeshift bed during a night-long performance in the Eiffel Tower with strangers who, in turn, five minutes each, kept her awake and entertained until dawn (with stories, of course). In Voyage en Californie (Trip to California), she even sent her mattress, pillows and sheets to some unknown heartbroken creep overseas who requested to sleep in her bed for the time needed to recover. He gratefully sent everything back six months later: plenty more fish in the sea.

A practical hunt for love actually concludes the show on the museum’s third floor. For Le Chasseur français (The French hunter, 2017), 12 framed texts, Calle compiled, and highlighted key phrases from, personal ads published in the eponymous French hunting magazine between 1895 and 2010, summarising the changing qualities sought in women by men. Whereas at the turn of the twentieth century these debonair gentlemen preferred ‘not poor’ and ‘unsullied’, the dream since the turn of the twenty-first has been different: ‘not a pain in the ass’, for one thing, ‘not far’ for another.