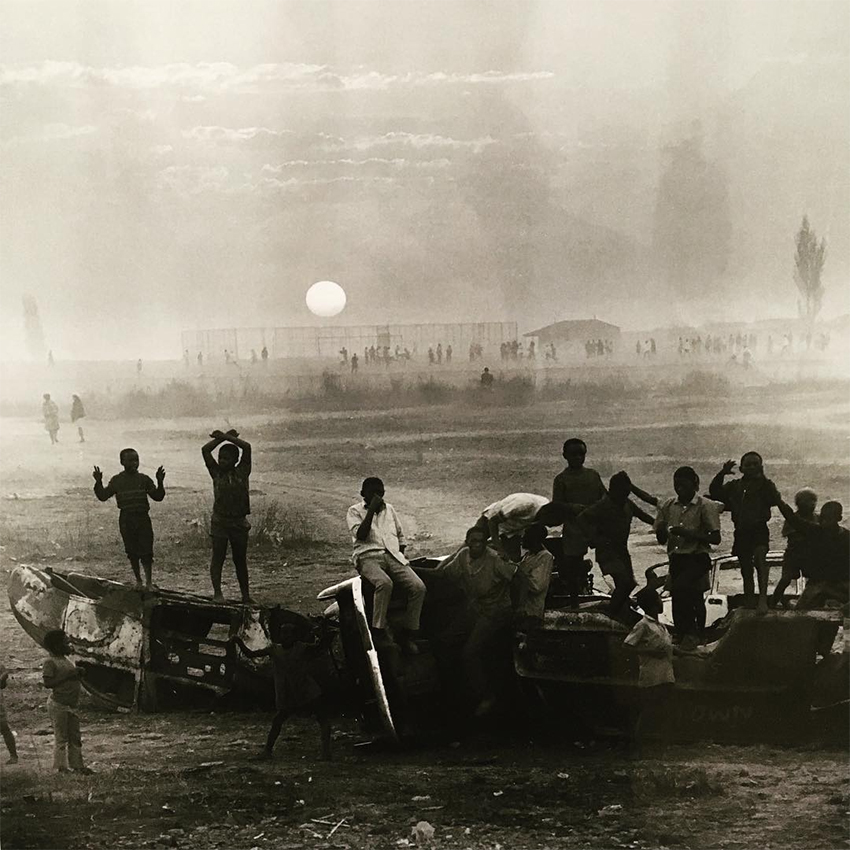 David Goldblatt’s first retrospective in France, currently on view at the Centre Pompidou, unfolds across 250 photographs ranging from 1946 to 2016. The acclaimed eighty-seven-year-old South African photographer has spent his entire career capturing the ordinary—though at times dramatic—manifestations of the deep racial divide afflicting his country. “I want the most with the least: straightforward photography leading to what Borges, in regard to writers and writing, called ‘a modest and hidden complexity,’” he notes in the text viewers read upon entering the show. Words have always been significant to Goldblatt, whose photographs are systematically supplemented with highly detailed titles and captions. He has also authored all the wall texts punctuating his Parisian survey, which is arranged in two parts. The first includes past series touching upon the contrasted fates of black and white communities during the apartheid era (1948–94). The second is dedicated to his lifelong project Structures, which documents the urban and architectural traces of ethnic segregation throughout South Africa.

Born in 1930 into a family of Jewish immigrants who had fled European persecution, Goldblatt grew up in Randfontein, a typical gold-mining city of the Witwatersrand area, where Africans from all over the continent would come and work for low wages (and still do). Determined to become a magazine photographer, he self-taught himself and took his first pictures at the early age of sixteen, some of which are exhibited here. They portray tailings heaps, on which he used to play and contemplate miners at work, then unaware of their particular circumstances. Two decades later, he provided powerful metaphors for the strain and misery many have endured—to the benefit of but a few—with simple depictions of facilities and tools in his mid-1960s series On the Mines. The image Shovels retrieved from underground, Central Salvage Yard, Randfontein Estates, Randfontein, 1966, for instance, depicts a huge stack of spades with the following caption: “Virtually every grain of sand in the mine dumps that made the Witwatersrand landscape was in a rock that came off the shovel of a black miner underground.”

In his 1960s series Some Afrikaners Photographed, Goldblatt concurrently focused on the lives of Dutch-descended farmers, also known as Boers, the primary supporters of the Nationalist Party responsible for apartheid policy. The diptych Kleinbaas with klonkie, Bootha Plots, Randfontein, Transvaal (Gauteng), January 1963 follows two boys playing outside. The first picture immortalizes the children seated together on a four-wheeled cart, whereas the second turns around this ideal of innocence and friendship to reveal instead an image of unmistakable racial subordination: a little black servant pushes his little white master up a hill to ride again. “Apartheid was a grey matrix of legislation and regulation hanging over the country, penetrating, restricting, controlling, cramping every aspect of life. Nothing and no one escaped it,” Goldblatt comments in a wall text nearby.

The exhibition continues with a stunning ensemble of early 1970s portraits, which were originally commissioned by the South African magazine Optima. They mostly represent segregated people in Soweto, a township bordering Johannesburg. Often concerned with the way people compose themselves—consciously or not—in front of his camera, he actually kept direct eye contact with all the subjects of these photographs. Many of the pictures were taken within the confined interiors of “matchbox” houses, the precarious accommodations provided to black workers by the apartheid government, which otherwise forbade them to own property. That said, the crepuscular view of Sunset over the playing fields of Tladi, Soweto, 1972 even more powerfully conveys the claustrophobic feel of this repressed existence. It shows children playing and posing on wrecked cars in the middle of a junkyard, a scene of sublime desolation behind which a humble skyline disappears into a haze of dust. In contrast, the series In Boksburg, which Goldblatt realized at the turn of the 1980s in a typical white suburb, extends a full horizon of possibilities for its inhabitants. For instance, the idyllic Saturday afternoon in Sunward Park, Boksburg, April 1979 represents a shirtless man mowing his lawn on a radiant day—a routine weekend for some, an unreachable dream for others until the end of the twentieth century.

While Goldblatt’s style and method vary from one series to the next, the constant impartiality and benevolence of his gaze are perhaps what best describe his unique approach to social documentary photography at the crossroads with fine art. He never judges his subjects, but seeks to expose the most insidious dynamics of discrimination in the everyday—that is, in the simple ways people and their surroundings present themselves before his eyes. His work is all the more subtle in that it doesn’t always engage head-on with politics, or at least at first glance. For instance, his little-known mid-1970s series Particulars consists of rather formal close-ups, which highlight the body language and garments of either black or white people randomly encountered in the streets and parks of Johannesburg. Among them, Man sleeping, Joubert Park, Johannesburg, 1975 literally embodies the sense of constriction and bareness that pervades the entire exhibition: a black man curled up on a sunburnt lawn shields himself behind the tightly interlocked fingers of his hands. The series overall offers an extremely intimate counterpart to Goldblatt’s colossal ensemble Structures, in which people’s skin colors eventually translate into divergent architectures.

As if to remark upon his country’s newfound, but tenuous, democratic freedom, Goldblatt started taking color photographs in the early 2000s, for only about a decade. A dozen are presented here. Among them, 5:52 AM, Going to work in 2012 shows a continuous stream of buses on their way to Pretoria from the remote former Bantustan of KwaNdebele—one of the so-called “homelands” that were created under the apartheid regime for black South Africans to inhabit, often against their will. This fairly recent image dismally echoes an older series, The Transported of KwaNdebele, which was made in 1983–84 and documented from the inside the excruciating six-hour-long bus commute of the Ndebele people going every day to Pretoria for work. Deploring this unbearable persistence of racial inequities, as well as the corruption and unprecedented unemployment that his country also faces after Jacob Zuma’s controversial nine-year-long presidency (he was forced to resign just a week before the retrospective’s opening), Goldblatt has since returned to the intensity of black-and-white photography. “Apartheid has gone,” he concedes; “its half-life will continue beyond knowing.”