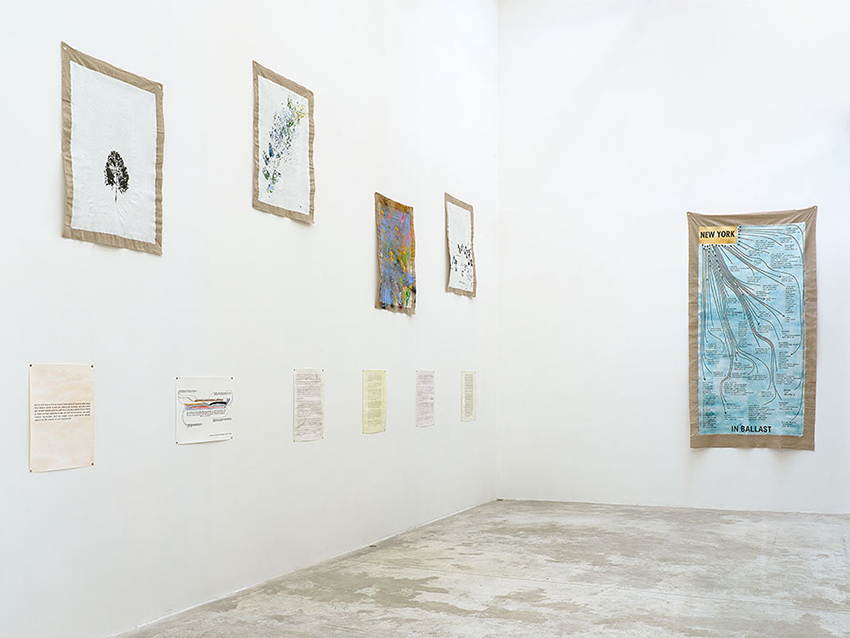 Before the advent of steel ships and the widespread introduction of water pumps in the mid-twentieth century, heavy materials such as earth, sand, rocks and rubble were used by merchant vessels as ballast to counterbalance the weight of their cargoes and crews. So that boats could take on more freight, this ballast waste was dumped at foreign ports, where it would be reused as landfill. Exotic plants from all over the world flourished on these grounds, altogether altering the landscape.

Including an ensemble of 22 paintings, texts and maps, this exhibition is the latest iteration of Maria Thereza Alves’s project Seeds of Change (1999–), which she first undertook in the European seaports of Marseilles, Reposaari, Dunkirk, Topsham, Liverpool and Bristol, before travelling across the Atlantic in November 2017 to stage the exhibition at the New School, New York. Through long-term research, the Berlin-based Brazilian artist seeks to unravel the tortuous history of migration during the colonial era by tracking plant species accidentally introduced to new lands through the discharge of ballast water and sediments.

Upon entering the show, viewers are introduced to the topographical singularities of New York with Traces from the Past: Some Ballast Material and Flora (all works 2017). Sketched in ink and watercolour, this map highlights all the neighbourhoods from Brooklyn to the Bronx where ballast soil and flora can be found, making clear that much of Manhattan was erected on ships’ discarded materials. Displayed next to it, the four watercolours of Alves’s series Ballast Indicators illustrate, in the typical botanic style, common weeds that still grow out of pavement cracks all over the city yet are native to Eurasia or Africa. Hanging loosely against the walls in the main exhibition space, six untitled acrylic and ink paintings on linen further represent delicate floral imprints or, as I see them, ensigns. Alves used wildflowers as brushes to realise them – including the Eurasian dandelion and greater celandine, both introduced to North America through maritime trade.

Perhaps more significantly, eight short, all-caps manuscript texts on light monochromatic watercolours (abstract seascapes, if you will) each relay the artist’s disorderly account of some evidence gathered throughout her coastal investigations. Taken altogether, they divulge a truly complex correlation between silenced if not untold colonial histories. In “Whenever people were transported” , for instance, she suggests that Caribbean coral sand can be found in the harbour of New York because its ‘settlers preferred enslaved Africans “seasoned” in the Caribbean to enslaved Africans purchased directly in Angola’. She also indicates that with the cotton plantations thriving in the United States, and so much of their production shipped to Liverpool, some Irish people fleeing the Great Famine could be ‘brought listed as [live] ballast into the port of New Orleans as the rates were cheaper’. Finally, in “The Liberia”, she mentions how emancipated African Americans who left the country to found Liberia ended up enslaving the natives there, not allowing them to vote until 1963.

Wherever Alves has docked so far, Seeds of Change has led to the site-specific creation of new ballast flora gardens in a collaborative effort involving both local communities and horticultural experts. The plants cultivated and exhibited in New York are missing in the Parisian exhibition, which significantly truncates it. The show nevertheless offers a powerful glimpse of the artist’s eco-philosophical journey, which draws suggestive parallels between displaced seeds and populations, all the while hinting at episodes of violent colonial diaspora such as, but not only, the transatlantic slave trade. In doing so, it radically challenges fixed notions of indigenousness.