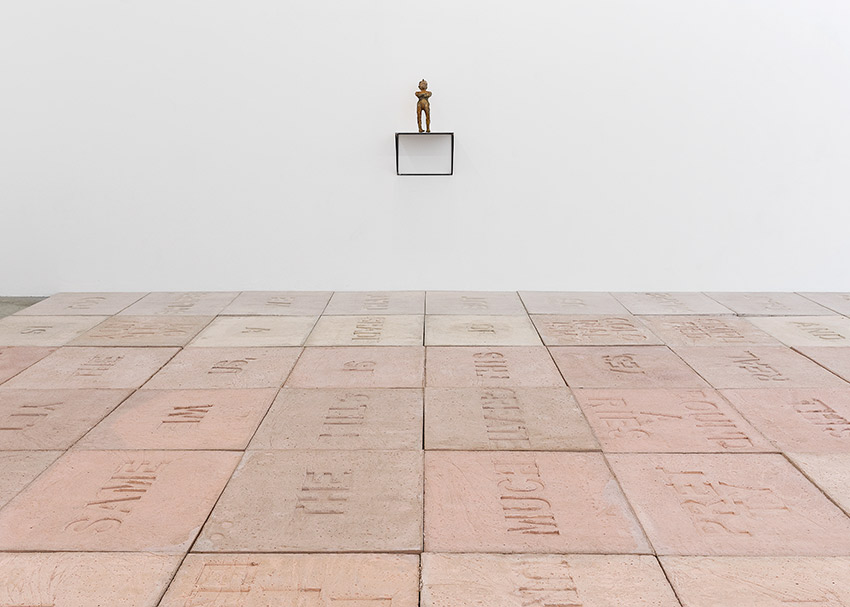 A curious bronze statuette perched on a balustrade overlooking Perrotin’s courtyard fiercely welcomes visitors to Iván Argote’s ‘Deep Affection’. Titled Proudly (2018), it’s a deformed human figure with inverted feet – one of five similar sculptures in the exhibition. The Colombian-born, Paris-based artist – whose practice responds to our politically distorted perceptions, both of each other and ourselves – conceived the show around the idea of ‘antipodes’. Derived from the Ancient Greek words ἀντί (opposite) and πούς (feet), for millennia this notion has inspired the most grotesque caricatures of people from other hemispheres. Hanging at the gallery’s entrance, the laser-cut steel wall sculpture L’Idée de l’autre (The Nuremberg Chronicle, 1493) (The Idea of the Other, 2018) delineates a naked, monstrous man whose feet are also backwards-facing. It’s a reproduction of an illustration from the Liber Chronicarum, a 15th-century history of the world in which the German historian and cartographer Hartmann Schedel described the antipodes as ‘an unknown region across the Mediterranean Sea’.

In the video As Far as We Could Get (2017), Argote portrays inhabitants of two diametrically opposite cities: Neiva in Colombia and Palembang in Indonesia. Their similarities are touched upon in seven short, otherworldly scenes. One slow-motion sequence follows people wandering the streets. The artist, offscreen, surprises each of them from behind by delicately brushing their shoulder. As they turn around, their initial shock soon turns to friendliness. Concurrently, two voice-overs – in Spanish and Indonesian – gently invite us to engage in the ‘decolonization of the spirit’ by ‘looking at things directly’ and ‘avoiding filters’. Slogans written in English and superimposed throughout the video also prompt us to love and mingle with strangers as an act of resistance. Among them, ‘We are others’ echoes the rallying cry ‘Je suis Charlie’ (I am Charlie), which has particular resonance in Paris after the 2015 massacres of editorial staff at the headquarters of the satirical magazine Charlie Hebdo.

Political statements further inform the floor installation About a Place – A Precious Place (2018). Arranged in nine rows, it comprises 180 concrete slabs, each engraved with a single word. Walking over them, phrases – such as ‘We build up differences under the influence of ideological agendas’ – unfold one step at a time. In the four wall sculptures from the series ‘Skin’ (2018), the slogans take a firmly sensual turn. Painted in black capital letters on concrete supports, which were then crushed into pieces and incompletely re-assembled, the works’ uneven, overlapping parts make their respective messages quite hard to decipher. The artist refers to them as ‘subliminal’. In the last room, the largest composition concludes the show with the words ‘melting our bodies’.

Yet, none of these works blends the political and the intimate as poetically as Reddishblue Memories (2018). This short film attempts to unravel the mystery behind three family photographs, which unexpectedly turned purple. They represent Argote’s father demonstrating with children in the 1970s. (He was a primary-school teacher in Bogotá and, like the artist’s mother, a political activist.) The film alternates these archival images with recent studies of his parents’ hands and feet, while two voice-overs – in Spanish and Ukrainian – share a fascinating (though unverified) theory that, in the midst of the Cold War, after realizing that Kodachrome photographs turned red over time, the US company Kodak developed Ektachrome images to turn blue, so they wouldn’t unintentionally promote the colour of their (communist) enemy. The narrators then make another colourful suggestion. Hypothetically taken in Kodachrome and processed in Ektachrome, Argote’s purplish memories could be the uncanny and hopeful product of two antagonistic ideologies.