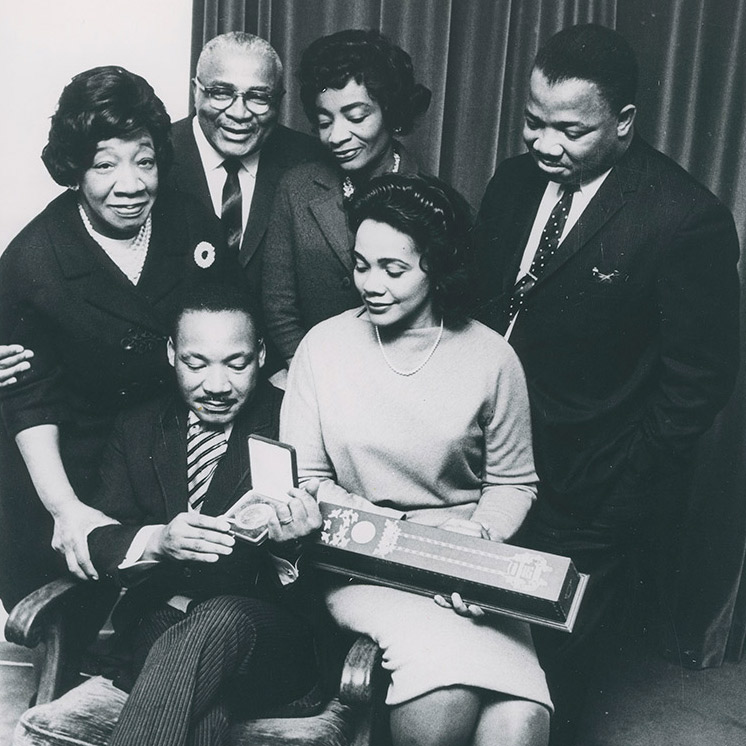 In 1942, when John H. Johnson founded the Johnson Publishing Company, the national press in the United States hadn’t made much space for addressing the lives of black citizens in a proactive way. Life magazine was really more about white life. Starting with the monthly Ebony and its weekly sister Jet, created in 1945 and 1951 respectively, Johnson’s magazines were designed to fill the void left open by institutionalized racial segregation. A void creates an opportunity, and the renowned Chicago-based publishing house would cover and celebrate, over the next seventy years, the breadth and wisdom of African American culture, eventually becoming one of the most influential black-owned businesses in postwar America.

In addition to the distinct upbeat tone and entrepreneurial spirit that Ebony and Jet cultivated through news, entertainment, and fashion coverage, as well as their plethora of critical essays regarding African American history and achievements, the magazines are notable for having thoroughly chronicled the nascent civil rights movement from the early 1950s on. At the same time, the Johnson Publishing Company also launched the Ebony Fashion Fair, an annual show that ran for five decades and featured black female models across the United States, as well as the eponymous brand Fashion Fair Cosmetics, which still exists to this day.

With print media finally giving in to the digital world in the early 2010s, Linda Johnson Rice—the heir and current CEO of the Johnson Publishing Company—sold Ebony and Jet in 2016 to concentrate the whole business on the cosmetics line. She has nevertheless preserved and made available to the public the photo archive of her parents’ former press empire: approximately four million images documenting African American life since the mid-1940s, the vast majority of which have never seen daylight.

This exceptional profusion of black images is the starting point of an exhibition and publication conceived by Theaster Gates for the Osservatorio of the Fondazione Prada in Milan, The Black Image Corporation. It touches upon notions of beauty, power, and the diversity of blackness through the work of two African American press photographers in particular, Moneta Sleet Jr. (1926–1996) and Isaac Sutton (1923–1995), who were once employed by the Johnson Publishing Company.

Born in 1973, Gates, a Chicago-native artist and urban planner, has gained international recognition for his multifaceted, often-collaborative practice committed to social change. Deploring how the African American community is still too often reduced into a mere handful of negative stereotypes, he decided to focus on beauty through the lenses of Sleet and Sutton. “They both had the responsibility of fashion and politics,” Gates told me in September. “They could shoot a fashion show during the day, and join a political rally at night, so in some ways, I think they were both using fashion to be political.”

From over twenty thousand photographs by Sleet and Sutton, Gates selected 366 for The Black Image Corporation, whose title is a direct nod to the Johnson Publishing Company’s crucial role in giving black excellence a visible outlet. “While it’s probably the simplest presentation I’ve ever done, the hardest part was deciding the images,” he noted. Scattered on two light tables at the entrance of the Osservatorio, 120 contact prints of original transparencies and photo films represent the enormity of the task. Visitors are invited to handle them with a pair of white gloves and illuminate what they wish. Ebony and Jet’s art directors used such materials to review countless pictures from photo shoots, only to publish but a few. This participatory display thus offers a subtle mise en abyme of both the editorial work that went into the conception of the magazines, as well as the curatorial work factoring into this exhibition.

Instead of a traditional exhibition catalogue, Gates has conceived a box set in collaboration with the Fondazione Prada. It contains a booklet with an essay, and the entire collection of 366 photographs in the form of double-sided cards, which can be taken out and hung with a fastener on the box; the gesture recalls an action that visitors are also encouraged to do at the Osservatorio, where a third of Sleet and Sutton’s selected work is stored for viewers to pull from a series of four wooden cabinets. “It would be lovely just to present all the photographs on the walls, but if you want to see them, you have to work. These cabinets function like a sanctum and what I hope,” Gates said, “is that there will be an intimate encounter with the images.”

In the absence of any official cataloging from the Johnson Publishing Company, Gates assigned to all the selected photographs by Sleet and Sutton a number from 1 to 366, and created six archival codes to characterize their subjects, without further identifying or contextualizing them apart from the photographer’s name and the year of realization: MDL for model, EDP for everyday people, ENT for entertainer, PRO for professional, M&C for mother and child, and FEI for female impersonator. While fashion photography and model headshots count for more than half of the ensemble, the other categories prompt viewers to question the notions of beauty beyond glamour. “What I want to convey through these images is perhaps a sensitivity to the power of everyday women to be both beautiful and maybe world-changing,” Gates noted.

Unfurling throughout the selection, Sleet and Sutton’s avalanche of beauty and power includes a model sporting a sleek bob haircut with a Mondrian cocktail dress (68 SLEET 1966 MDL); a drag queen parading with sweat pearl headgear and a little black purse (43 SUTTON N.D. FEI); Ann Lowe flaunting her legendary top hat (126 SLEET 1966 PRO); Eartha Kitt posing in a swimsuit at the pool (48 SUTTON N.D. EDP); and last but not least, Martin Luther King Jr. surrounded by his wife, Coretta, and his family, holding the Nobel Peace Prize medal that he had just been awarded (176 SLEET 1964 EDP). Sleet was later awarded a Pulitzer Prize for his picture of Coretta Scott King at her husband’s funeral, following King’s assassination in 1968.

The presentation of all these individuals, whether iconic or not, in complete anonymity and therefore in equality—particularly before a European audience, who may be less familiar with African American culture and history—is very humbling. The Black Image Corporation poses no hierarchy, but allows for the young models who won the “Beauty of the Week” contest of Jet magazine to count as much as King himself, no matter how well- or little-known their respective contribution to this world is. As Gates concludes in his essay for the booklet that accompanies the exhibition, “Black is Beautiful. Black is Enterprising. Black is complicated and … I hope this set of images offers us all blank pages for the formulation of a new atlas.”