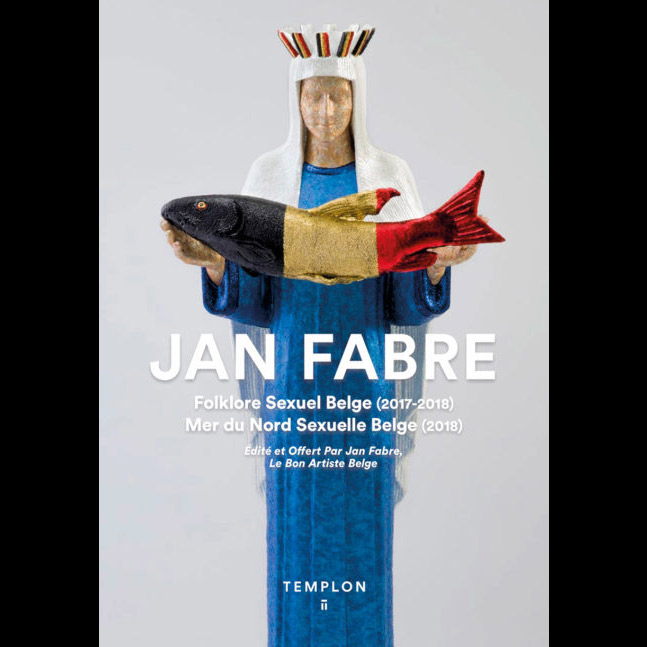 Perverted Perversions: The Carnivalesque, the Congolesque

Standing out a mile, the dozen merrily bawdy sculptures covered with colorful glitter are without a doubt what viewers first notice and perhaps even last remember upon visiting Jan Fabre’s exhibition Sexual Belgian Folklore (2017-2018) Sexual Belgian North Sea (2018), named after two series of mixed-media works. Yet, almost fifty small drawings mounted in elegant gilded frames and red-velvet passe-partouts more discreetly punctuate the otherwise showy show. The Antwerp-born artist conceived the overall ensemble as a critical celebration of Belgium against the rise of right-wing communitarianisms threatening to splinter his country – or so he told anybody asking during the inauguration of the new Galerie Templon in Paris. Underlying his grotesque display of male and female genitalia glued on fake mollusks, carnival masks and many other curios, including an imposing Christian cross and a working barrel organ, such a deep political statement wasn’t particularly, if at all, expected.

Far from the provocative exuberance of their sculptural counterpoints, Jan Fabre’s delicately framed pictures call for the attention of more experienced voyeurs. From one series to the next, they unfold quite surreal (but no less crude) carnival parades and religious processions in dialogue with seemingly innocent aquatic scenes. Among the works dedicated to the North Sea, not so naive images thus depict spermatozoa inseminating seashells, eventually giving birth to naked chubby cherubs, while other children further tease one another underwater. Essentially naughty, all these miniatures are pencil and watercolor alterations meticulously drawn over originals or copies of old chromos, which the renowned chocolate factory Côte d’Or – like many other sweet brands throughout the 19th and 20th centuries – used to offer for loyal customers to collect. As a direct nod to its catchy slogan ‘the good Belgian chocolate,’ Jan Fabre wittily signed ‘the good Belgian artist’ to his now-subtly debauched and all the more delicious vignettes.

So how does one get from an unrestrained notion of carnal pleasure (the literal definition of carnival before the austere fasting of Lent, and the apparent theme of the exhibition) to more or less serious profanities supposedly fighting nationalism? Although a presumed sugar addiction could never explain all the good artist’s trips since 1958, here the answer truly lies behind the treats. As a matter of fact, the ensemble of chromos dedicated to Belgian folklore was originally edited in the midst of the Second World War, when Côte d’Or launched its ersatz chocolate Congobar due to low supplies of quality cacao beans under German occupation. Despite the horrid reality of slavery, the brand had historically built its visual identity on an African fantasy. This isn’t the first time that Jan Fabre diverts its deceptive iconography to touch upon his country’s dark colonial past. In his series Tribute to Belgian Congo (2010-2013), among many advertising and propaganda images from that time, he reproduced one promoting the pseudo-chocolate, which falsely depicted a Congolese man with caricatured thick lips and large hoop earrings happily holding out a giant Congobar.

All the compositions in this bittersweet tribute were stunningly made out of countless elytra – the iridescent wing cases of scarabs. Jan Fabre had already experimented with these fiercely poetic beetle shells in the installation Heaven of Delight (2002) still covering the ceiling of the Royal Palace’s Hall of Mirrors in Brussels, whose decoration was intended to recall the former colony. In the tradition of Flemish painting which fuels his practice, and particularly the vanitas genre, scarabs like other insects were powerful symbols of renewal or rebirth, that is, both life and death. Taking a final look at the drawings in disguise at Templon, what appears first as an orgiastic deluge soon becomes rather gruesome. Drops of black and red blood – incidentally the colors of the Belgian flag – trickles from the hands of various protagonists. Although some of the artist’s previous works more frontally tackled the ever-present shadow of colonialism in his country, not being able to see it as clearly here doesn’t mean it has disappeared. Like the gold and velvet with which he decided to deceitfully expose his perverted perversions to, perhaps, better fool the bourgeois, the critique is just more insidious. Beneath their lustful surface stands a strong political comment: at the crossroads of Europe and the rest of the world, no nationalist ground has ever done justice to Belgium.