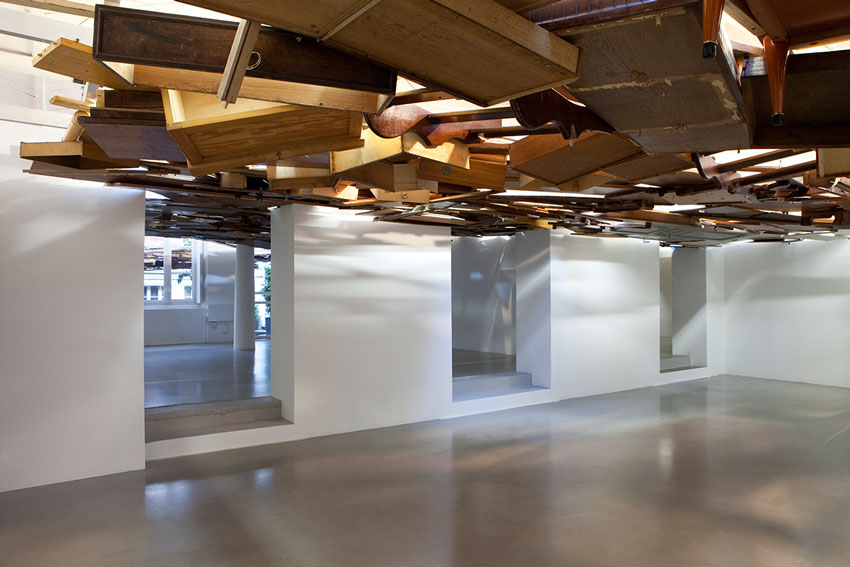 Tadashi Kawamata’s in situ installation at Kamel Mennour, Under the Water, is a wide litter of wooden junk that hangs, swinging slightly, over the gallery’s seventeenth-century porch, courtyard and three main spaces on the first floor. This suspended assemblage of shattered rubbish is entirely made of dismantled furniture such as recognisable parts of doors, cabinets, drawers, high chairs and cribs, all collected from dumpsters at Emmaus in Paris prior to their artistic ‘ascent’. While very nicely shading and scattering the light above the visitors, this quite monumental yet completely precarious construction seems to fall right into the softly subversive path of the eco-friendly Japanese artist, whose practice of working on site has mindfully allied politics and poetics with reclaimed material and, to some extent, the local context of his interventions since the 1990s.

That being said, Under the Water is absolutely unrelated to the Parisian scene, being designed to offer a semblance of submersion in remembrance of the disaster that hit Japan a year ago – the tsunami that devastated the northeastern coastal region of Tōhoku following a massive undersea earthquake. In light of this memorandum, though, don’t be too quick to mentally associate all the discarded Emmaus furniture overflowing the gallery with the countless lives and households that were lost and broken during the 2011 catastrophe. This interpretation is not only simplistic (and quite frankly a bit cheap) but also incomplete. In the basement, lost between a slide projection of past interventions and a couple of notes and sketches describing an upcoming project, the artist glued on the wall a short piece clipped from a newspaper, which opens the deciphering onto another level.

Indeed, the article points out that, while drawing back from Japan last year, the gigantic waves carried away miles of debris, forming a vast and solid field which is currently floating across the Pacific Ocean to a west coast landfall – in which case Hawaii is first expected to see tsunami detritus crash ashore as soon as 2013. That is of course only the part that won’t dissolve into the Great Pacific Garbage Patch, also known as the Eighth Continent – the humongous and extensive marine litter made up of all of our unwanted filth. Because it is mostly composed of disintegrated plastics, this rubbish soup is overall translucent and invisible from space. Therefore, besides the drama of the human loss, Kawamata’s intention may be to figure this infinite discharge of pollutant chaos, and acknowledge a problem, which contrary to his installation may be transparent but certainly not ephemeral.

Finally, in case Under the Water mesmerised you but failed to deliver that little frisson of the epic, the pending project – depicted downstairs – may succeed in doing so since it involves importing waste timber directly from Tōhoku in order to build a tower at the Palais de Tokyo in Paris. Given the explosion of Fukushima nuclear power plants following the cataclysm and the understandable – yet irrational – fear of radioactivity it triggered all over the world (starting with the undamaged parts of Japan, like Kyoto and its annual bonfire festival, Gozan no Okuribi, which cancelled last summer its usual order of wood from Tōhoku because of radiation scare), you won’t be too surprised to learn that the French authorities have yet to approve Kawamata’s proposal.