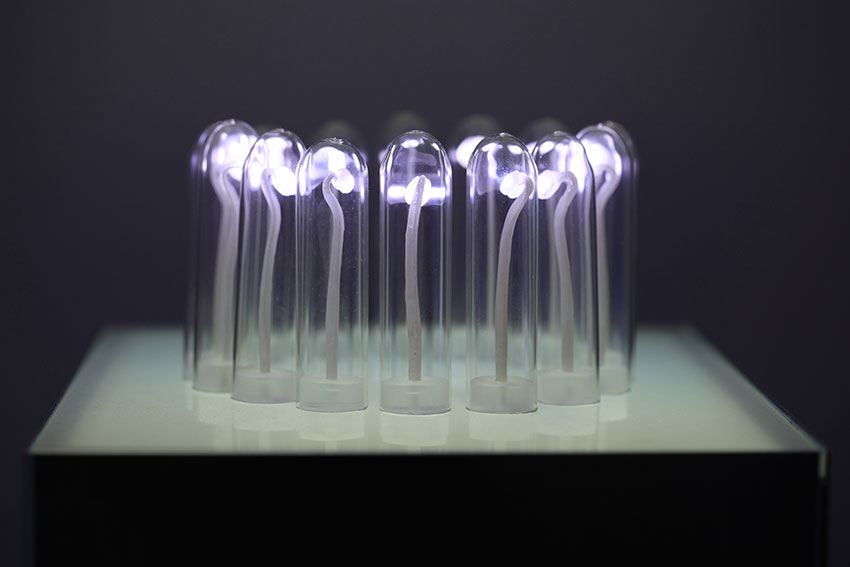 According to world statistics, 4 people are born every second and 2.5 die. Theoretically, if this ratio between natality and mortality maintains itself, how do you visualize the problem of overpopulation it logically leads to, when there is no room left for every new life? For his first solo show Sic Vita (“such is life”) at Numeriscausa, French artist Stéfane Perraud (born in Paris, 1975) translates this problematic into a computer program and the fascination of glimmering lights. In the installation Lueurs (2008), 6000 blue light-emitting diodes are set on a rectangular table. An LED that lights up corresponds to a newborn life and an LED that turns off to a death (respectively 4 and 2.5 per second). Since the number of LEDs on the table is definite, an impasse is reached after a forty minute cycle, when lives have conquered so much space that it is impossible for the computer to maintain the given ratio. In response to this saturation of light, the computer crashes and resets. All the LEDs flash on and off for a couple seconds until the program restarts from a corner of the table with just a few lit up survivors. In real life, what would likely cause such a crisis are the unknowns of ecological disaster, world epidemic, or genocide. The first version of Lueurs with 18000 LEDs was originally installed in the nave of Saint-Germain de l’Auxerrois Church beside the Louvre during the Nuit Blanche 2008. According to the artist, it caused among the viewers “an almost pornographic relief”, as they were impatiently waiting for a denouement in the hypnotizing gleam of the blue LEDs.

In the two other pieces on display, Stéfane Perraud’s data-aesthetic focuses on natural food resources. Modifié#2 Soja (all 2009) is a delicate and handmade sculpture of sixteen resin soybeans filled with blue LEDs and set inside crystalline tubes on a pedestal. A very discreet interactive system is set up so that “the artwork becomes sensitive to its environment”, says Numeriscausa director Stéphane Maguet. Thus the artificial soybeans react to the movements around them, as if they were trying to protect themselves from human approach. The more people gather around them, the more their fragile light chaotically vibrates. Finally, Modifié#3 is a digital print made after Millet’s 1857 painting The Gleaners, which depicts women collecting wheat seeds on a field after the harvest. This scene, which Stéfane Perraud reduced to the minimum resolution of 1 pixel per inch while conserving its original format, becomes the pixels that would otherwise represent it—the pixels are so large that Millet’s painting is only recognizable from a distance. Just as plants have been modified throughout the millenia-long history of agriculture—and most recently with genetic engineering—art “naturally” evolves with new technologies. But if the fear expressed against GMOs is justified and prudent, we must observe that the recurrent distrust of new media art forms, as if they were less authentic or sensitive than tradtional art-(ifice!), isn’t nearly as relevant.