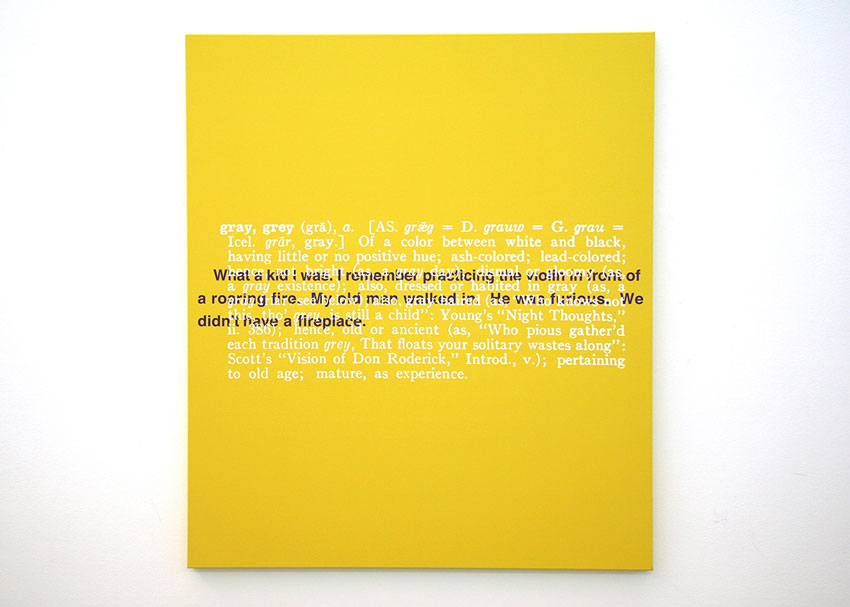 A decade into his search for the improbable juncture between conceptual and Pop, idea and product, Stefan Brüggemann devotes his third solo show at Yvon Lambert to a chance encounter, so to speak, between Joseph Kosuth and Richard Prince – the pair meeting on the shared territory of language. With the apparent detachment of a voyeur and the discretion of a thief, the Mexican artist explores the symbolic confrontation between the adverse poles that the artists represent – rationalism and absurdity – via Untitled (Joke and Definition Paintings) (2011), 31 inkjet prints on canvas (though only 11 are displayed in the gallery). Each layers one dictionary definition from Kosuth’s Titled (Art as Idea as Idea) (1966–) series on top of one anonymous buffoonery from Prince’s Joke Paintings (1985–), or the other way around. A face-off, then: but the joust between the professedly high-cultural and the professedly low never quite gets going.

On the one hand, Brüggemann’s refereeing is as deliberately unreliable as his actual intervention in the compositions is strategically minimalist. From the font of the printed letters to the plain colour of the backgrounds and the overall scale of the simplistic designs, every formal decision has been ostensibly relinquished to Kosuth’s and Prince’s original photostat and silkscreen reproductions: a schema so apparently indifferent that it could be summed up by Brüggemann’s words: Take, Put, Abandon (this, and all subsequent quotes, from the artist’s ongoing list of Show Titles, 2000–). On the other, the superimposition of Kosuth’s definitions and Prince’s jokes not only estranges them from the previous context of these two artists’ distinctive intents, but also and more importantly turns them into each other’s very own disturbing and obstructing parasites (in case anybody would in fact be tempted to read, comprehend and interpret these textual displays of cacophony). That being said, stuck between Kosuth’s use of language, which tends towards literal abstraction (what’s behind the words), and Prince’s, which delights in nonsense (what’s beyond), it doesn’t take long to understand that in Brüggemann’s supposedly careless gleanings of Things Put on Top of Things or Nine or Ten Works I Used to Like, in No Order, no collision can, nor is meant to, occur.

Indeed, the two roughly opposite rhetorics of Kosuth and Prince cancel each other out in Untitled (Joke and Definition Paintings), which, rather than generating a miraculous Super Conceptual Pop chiasmus, leads to A Production of Nothing. The artist pushes to an extreme oxymoron any ideological material he appropriates, and in doing so he approaches with great pertinence the ineluctable dead-end of all bipolar systems, the annihilating Manichaeism that has been haunting all politics, including the aesthetics of art, since the Cold War. Behind Brüggemann’s couldn’t-give-a-damn attitude, then, there might well be a postmodern spleen; in which case he’s undoubtedly a master of contemporary chiaroscuro.