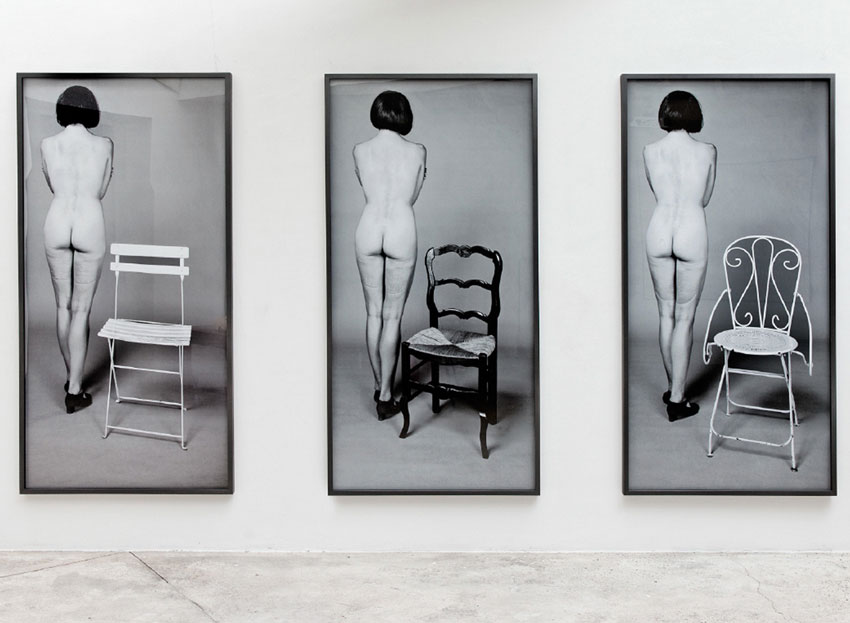 Catching your eye straightaway in Allegories and Metaphors, a triptych of full-length photographs depicts, in the 1920s style of high-contrast black and white, a naked female, facing away. Her curvaceous backside bears the impressed patterns of, respectively, three seats: two in wrought iron (one slatted, one mesh), and one in wood and cane, standing next to her in each case. Paul Kos’s 1995 series Emboss I–III (or dare we re-baptise it ‘One (Woman) and Three Chairs’, since one can’t help being reminded of a certain 1965 work by Joseph Kosuth?) is the quintessence of the wittiness separating West Coast Conceptualism from the austere, historically dominant New York version. One of its leaders in the Bay Area since the late 1960s, Kos (born 1942) was introduced to the Vallois gallery by one of his former students, French artist Julien Berthier – which resulted in this, his first solo show and survey in Paris, bringing together a small selection of his static and kinetic sculptures, photographs and videos, from 1968 to 2012.

While Kos came up with the idea of Emboss in a Parisian café summers ago, amused by the seat-prints that loungers wearing shorts or skirts would carry away upon leaving, his aesthetics typically proceeds in situ, like Lot’s Wife (1969), his first piece to use indigenous materials to the environment: local Jersey cattle. Invited by Rene di Rosa, the great supporter and collector of Bay Area art, to his Napa Valley wildlife reserve, Kos ended up stacking a pile of cow-lick blocks in a middle of a herd, documented hence by three photographs. As an ironic sequel to the Biblical figure turned into a pillar of salt for looking back at Sodom against divine command, the cows would eventually lick away the ephemeral sculpture. With site, too, often comes anecdote, whether personal or cultural: as with Montezuma’s Gift (1998), a pedestal-mounted bronze roll of toilet paper covered with a gold leaf. This treasure satirically embodies both the precious metal with which the Aztec ruler welcomed the Spanish conquistador Hernán Cortés right before his defeat and death during the latter’s 1520 invasion of Tenochtitlan, and the vernacular expression ‘Venganza de Moctezuma’ (Montezuma’s revenge) used since to designate cases of diarrhoea contracted by travellers in Mexico.

On another note, since the beginning of his career Kos has been working on viewer-participation pieces: “I don’t allow instructions to be put up for the viewer to read. Either the impulse to touch is strong enough or it is not,” he told me. One example here is Equilibre IV (1992), an opened coat hanger balanced on a freestanding broom while also holding in equilibrium a bell on one end and a candle on the other. “If one lights a candle, one worries, how much does a flame weigh?” the artist continues. While tension ran high during my visit and the precarious arrangement crashed to the floor, another piece, Diminuendo/Crescendo (2011) is only complete if, despite the customary convention of not touching art, you venture to play pétanque within the exhibition space. The musical notation for the two dynamics are painted on a wall-sized panel, diminuendo on top of crescendo, pierced at their highest points with, respectively, a small and a large hole. If you hazard tossing a lightweight wooden ball into the first or a heavy steel one into the second, you’ll hear a much more complex sound modulation through the cacophony of their descent, as the panel conceals two intricate labyrinths of tubes, which both conclude on a bell. Ding!