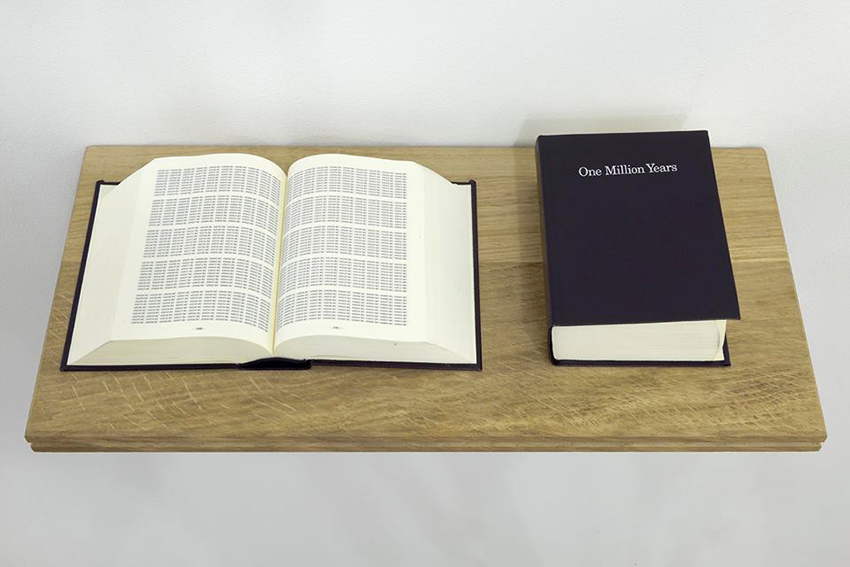 Following their collaboration on Mathieu Mercier’s Journal (2015), the independent publisher of artists’ books Michèle Didier invited him to curate an exhibition based on her catalogue of printed works. Two seemingly opposite motifs in Didier’s editions immediately caught Mercier’s attention and became the poles of his show Sexe, béatitude et logique comptable (Sex, beatitude and accounting logic). On the one hand, along with his Journal, he selected works expressing bare lust: Annette Messager’s Mes dessins secrets (2011) and Leigh Ledare’s Double Bind (2012). On the other, he chose highly conceptual and serial pieces: On Kawara’s Trilogy – I Got Up (2008), I Went (2007), I Met (2004) – and One Million Years (1999), Allan McCollum’s The Book of Shapes (2010), and Robert Barry’s One Billion Colored Dots (2008). Beatitude, of course, is common to and can be reached through both categories, ie the senses and the mind.

I could attempt to draw parallels between sexuality and serial art, and come up with a thoughtful aphorism about how they both produce difference within reproduction, but I’d rather tell you how this exhibition indeed led me to beatitude – or more accurately frenzy – in presenting you with a system of classification that consists in qualifying each artist with a hypothetical vice, one that I got from the experience of the works on display. In doing so for the sole yet opportune pretext that it greatly satisfies both my piggery and my stubbornness, I will borrow from the obsessive character demonstrated by all the artists here, whether they translated it through raw sensuality or concept. My list will unfold as the severity of my euphoria progresses. Before going any further, know that the prints pertaining to sex are for the eye only: laying flat under low vitrines, you have to bend over significantly to sneak a peek at their goods. Conversely, you can touch as you please the books pertaining to accounting, which are all installed on shelves at your disposal, and yes, this is how logic suddenly becomes enticing.

My list begins with Mercier or, as I see it, ‘the exhibitionist’, not that he shows his family jewels here, but he is the curator after all: his Journal presents a series of 28 black-and-white female nude photographs coming from his private collection. Next is Messager or ‘the libertine’: Mes dessins secrets is an album gathering in bulk the reproductions of 76 erotic drawings, which were all sketched on whatever piece of paper she could grab in moments of need and depict about any positions she could daydream of. Next is Ledare or ‘the pervert’: the first two volumes of Double Bind (Husbands and Diptychs) confront 371 photographs that he took of his ex-wife (Meghan Ledare-Fedderly) with 371 that her current husband (Adam Fedderly) made of her in the same secluded hotel room a few weeks later. In the third volume (Ephemeras), which reconstitutes, layer after layer, a pile of images that the artist cut out and accumulated from magazines, you may stumble upon a lot of hairy smut.

Leaving erotica behind, next is Kawara (RIP) or ‘the predator’: the three series in 12 volumes of his Trilogy document, for every single day between 10 May 1968 and 17 September 1979, all the postcards he sent out to inform people of the time he woke up (I Got Up), all the places he went to (I Went), and all the persons he encountered (I Met), which partly explains what he was up to between 1969 and 1993, the 24-year gap that separates the two volumes of One Million Years. Next is McCollum or ‘the utopian’: The Book of Shapes, which presents in two volumes a system for producing over 31 billion different shapes, promises to everyone on earth and beyond a unique, personalised, artwork. Last but not least, Barry, or ‘the monomaniac’, concludes my account with One Billion Colored Dots in 25 volumes, each its own colour: the 40 million indiscernible white dots printed on 2,000 white pages in volume 24 are about where beatitude lost me for good.