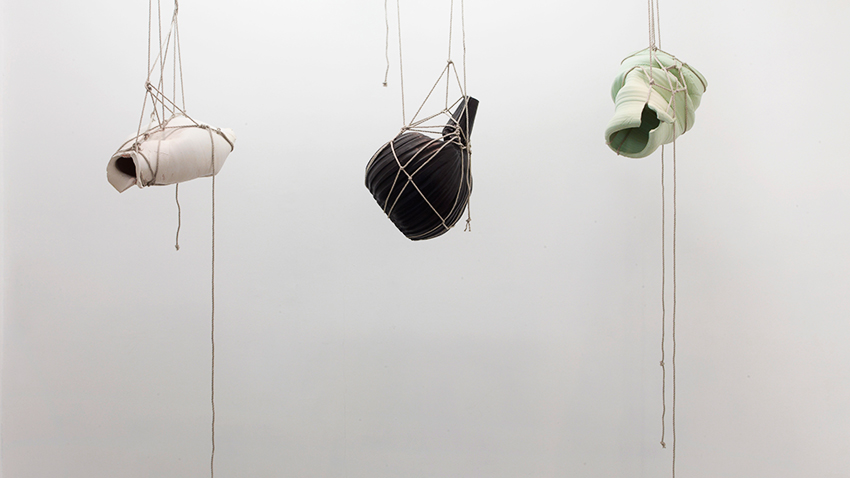 All the pieces presented at Loevenbruck were made last summer during the newly created program of NUOVE//Residency, a project for international artists to learn the techniques of and experiment with ceramics in Nove, no less than the historical capital of earthenware industries in Northern Italy since the seventeenth century. In Shibari, Tschiember revisits the eponymous ancestral Japanese practice of bondage – also known by connoisseurs as ‘Kinbaku,’ which literally means the ‘beauty of tight binding’. The body of work comprises three shapeless pots, each intricately tied up and suspended by linen rope, one beside the other, from the ceiling. If the art of Shibari is often considered a fetish by (corrupted) Westerners, it is nonetheless an aesthetics designed to reach communion on a carnal and spiritual level with (consenting) enslaved models – whether naked people or, as is the case for Tschiember, clay vessels. A rather sensual attempt, you’ll admit, to inhabit or explore the medium she’s recently seized upon, the tortuous knotting of the ceramics right after their spinning on the potter’s wheel and before their firing caused not only their voluptuous misshaping, but also many cracks on their flesh.

Speaking of which, the two ceramic works that constitute the second ensemble presented at Loevenbruck, Skin, do indeed share a certain quality with flesh’s delicate complexion and slow necrosis. Resembling something between a wedding veil and a death shroud, both are embroidered sheets that Tschiember covered with clay, preserving its natural whiteness for the one and applying mint green engobe to the other, before firing the compositions. The result is absolutely astonishing. While both ceramic textiles are displayed hanging from high steel pedestals, the clay does not adhere strongly to the fabrics and, throughout the length of the show, imperceptibly crumbles down to form at their bottom small heaps of powder. How does it go: from dust you were made, and to dust you will return?

It might as well be. The last ensemble displayed at Loevenbruck, Polystyrene, features three ceramic casts of the same 50-inch cube of white foam, made at three different stages in the process of carving the lightweight block with a welding torch. A little reminiscent of gravestones, the resulting clay sculptures are installed on three large steel panels laid on the floor in the middle of the gallery. And thus the pure, heavenly matter – polystyrene is composed of 98% air, after all – is forever frozen in stone.