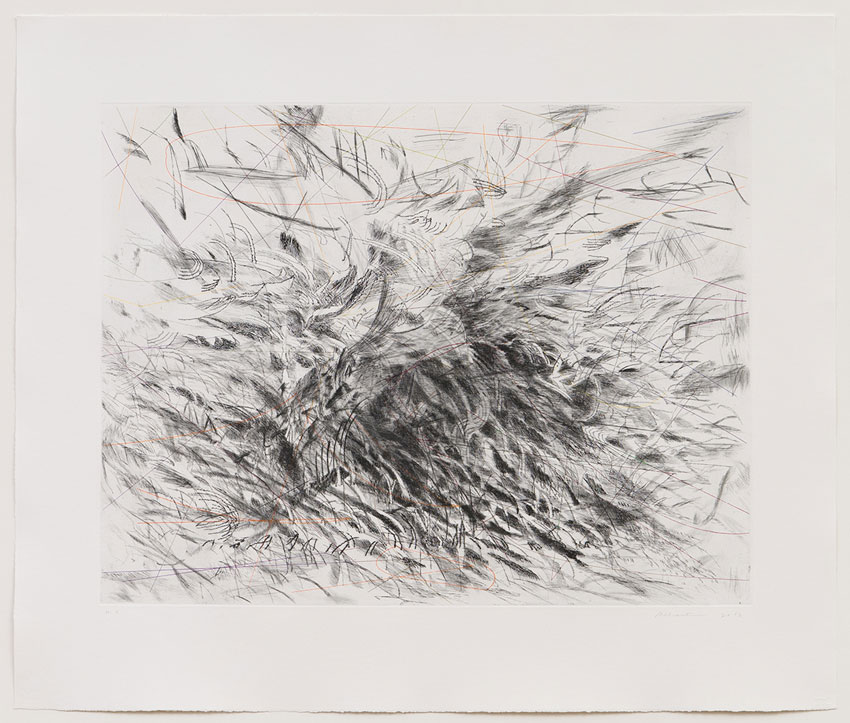 Its title referencing late beat poet Allen Ginsberg’s book Mind Breaths (1977), Julie Mehretu’s first show at Marian Goodman in Paris fans no less than 32 pieces of abstraction across the gallery’s two floors. It includes the following: a series of five etchings realised with master printer Gregory Burnet in New York (Untitled, 2013), an ensemble of 16 works on paper (Mind Breath Drawings, graphite, 2012), and finally a mixed group of eleven drawings and paintings on canvases (all untitled, in graphite, acrylic and, except for three, ink, 2012). Stretching over every single wall in the vast exhibition space (including the front desk), this rich display somewhat echoes the Ethiopian-born American painter’s aesthetic impulse to cover her surfaces almost entirely (apart from the edges) with a dense multilayering of restless scrawls and graphic shapes. Here, all these hyperactive hazes are described in the restricted palette of black, and only a few of them burst with sparse and colourful zips.

Up to this particular show, Mehretu has accrued great critical attention over the past ten years for her large-scale, noisy abstractions, the backgrounds of which systematically offered contextual intrusions of meticulous architectural drawings. These detailed, in perspective or elevation, real urbanscapes that the artist selected for their strong historical or topical interest within contemporary geopolitics. An obvious attempt to break away from the burden of 1960s ‘pure’ formalism (art as an end in itself), urban mapping allowed her to coalesce abstraction and content into a self-proclaimed investigation of globalism and identity. If the tension between the rigid virtuosity of architectural drawing and the vibrant spontaneity of frenetic scribbling constituted a possibly pertinent metaphor for the lively dissymmetry of powers between governments and people, the actual urban references were nevertheless, to say the least, often a bit subsidiary, a pretext for opening her truly abstract aesthetics onto a circumstantial political awareness or a level of significance beyond old-fashioned modernism. At Marian Goodman, it’s opportune that only one painting renders an architectural plan (Al-Manara Square in Ramallah, Palestine, which has been for decades the theatre of rousing protestations against Israeli occupation, but has very little to do per se with the overall show in Paris), while the rest of the exhibition successfully unfolds successive medium- to small-scale full (I won’t venture to write ‘pure’) abstractions.

Without a hot geopolitical allusion to possibly counteract Mehretu’s unquestionable and brilliant inclination towards abstraction – which becomes, here, the sole focus of scrutiny – latent tension is sustained even more strongly in her Mind Breath Drawings. Ready to implode, the more or less crowded clusters of nervous black markings at the heart of every sheet, which the artist refers as ‘characters’, inherently suggest uprising forces within imaginary topographies. Lacking the immediacy of drawing, her five etchings convey the same impression of a confined chaos. Burnet, who supervised their printing, told me it took over a year and a half and up to 30 proofs per piece to achieve the series: the result is astonishing. Perhaps, less like a political activist than a radiesthesia practitioner – those mediums who claim they can detect radiation from human bodies, and thus find lost people, using a pendulum and a map – Mehretu’s genius is to transmit into her art the vital energies she discerns from the observation of maps or the experience of her own psychogeography. Whatever it is though, her abstract aesthetics comes from an obsessive practice of drawing, one that evidently doesn’t need any pretext to flourish.