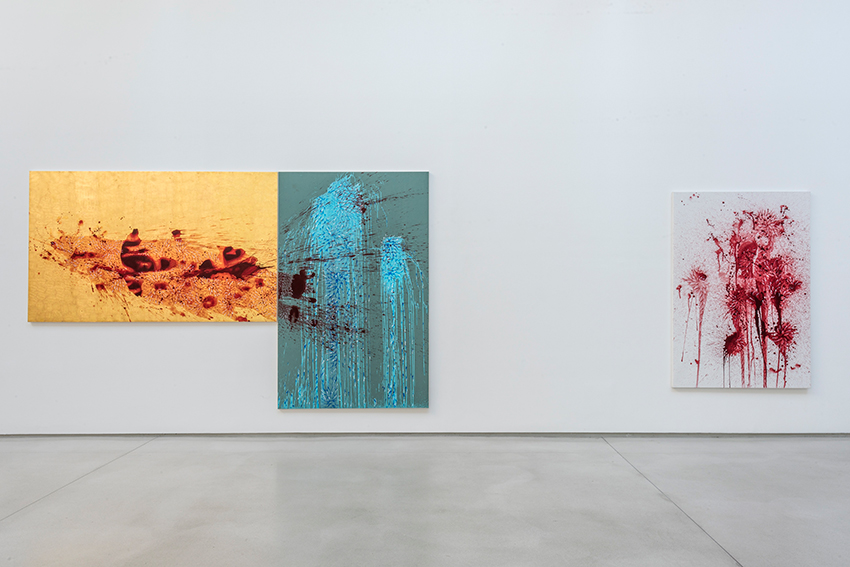 Deeply affected by the global changes that occurred after 9/11 and the ensuing wars on terrorism in Islamic countries that started with Afghanistan and Iraq, Imran Qureshi began using expressive symbolism to revive and engage in the present the highly demanding tradition of Mughal miniature painting, which he teaches at the National College of Arts in Lahore, Pakistan. The dreadful spate of suicide bomb attacks in his city during 2010 caused him to drastically shift towards the urgency of gestural abstraction, introducing overwhelming and gory red splatters into the otherwise delicate and illustrative practice that is Mughal painting. Qureshi has thus been pictorially performing, so to speak, a poignant yet hopeful dialogue between destruction and life, the latter symbolised by his meticulous description of florid leafage, a typical embellishment in miniature painting along with gilts. His first solo show at Thaddaeus Ropac, Idea of Landscape, is no exception and presents a vast ensemble of 29 artworks (all 2015) spread over two floors. Foliage arises here from what can be best described as a figurative bloodbath, which scales up traditional Mughal miniatures from small sheets of paper to large canvases.

At the entrance, Qureshi’s sanguine equation with nature begins discreetly with an actual miniature on handmade wasli illuminated with gold leaf: Threatened depicts five luxuriant trees on a plain blue background soiled with red gouache blots, from which arabesque stems emerge like new arteries of life. The same goes for Inside Story, in which the foliage of three trees is made out of flourishing vermilion stains. Undeterred by terror, then, life overcomes adversity – or, in these instances, grows back. As a hardly subtle yet splendorous consequence, the gorier Qureshi’s art is, the lusher it gets. Indeed on the same floor, his coalescence of blood and foliage extends onto much larger formats, in composite paintings verging on abstraction. For the partly gilded diptych and triptych both titled This Leprous Brightness – that is the first verse translated from Urdu of Faiz Ahmad Faiz’s famous poem Subh-i-Aazadi (The Dawn of Freedom), which the Pakistani intellectual wrote about his mixed feelings on the eve of his nation’s independence in 1947 – red acrylic paint was first splashed onto two and three aligned canvases respectively. Qureshi later placed them in different orders so as to infuse the slightly ethereal impression of a mysterious organised chaos into his final blooming compositions, in which the lavish foliage is outlined amid the disarranged spatters with fine white markings, while the plain turquoise background of another triptych, Fragmented, almost makes the bloody leafage appear like a flock of birds: that is to say, an omen.

Also ambiguous yet awakening more corporeal sensations of carnage and death, You Who Are U Love And My Life’s Enemy Too and Love Me, Love Me Not both assume a horrifying complexion, distressingly resembling wounded flesh and evoking the heartbreaking situation of those closely associated with terrorists, red being here the colour of bloodshed as much as affection. From one canvas to the next, it seems that Qureshi not only masters the exquisite techniques of Mughal miniature painting but also imposes himself as quite the action painter. Speaking of acting, while Love Me, Love me Not continues upstairs in a series of smaller paper works, in each of which vertical blood-like drippings end up in flowering buds like germs of hope, All Are The Colour of My Heart presents a full naked body print of the artist, who used himself as a gory living brush, thus brutally echoing and reversing Yves Klein’s 1960 series of Anthropométries performed in public by women. The eight-minute video loop Breathing concludes the show with a pristine display of Qureshi’s extraordinary sensibility, fragile sheets of gold leaf falling down and slowly crumpling in the air on a neutral greyish background. It is said that a miniature painter has to hold his breath for an instant when gilding, and this exhibition is appropriately breathtaking.