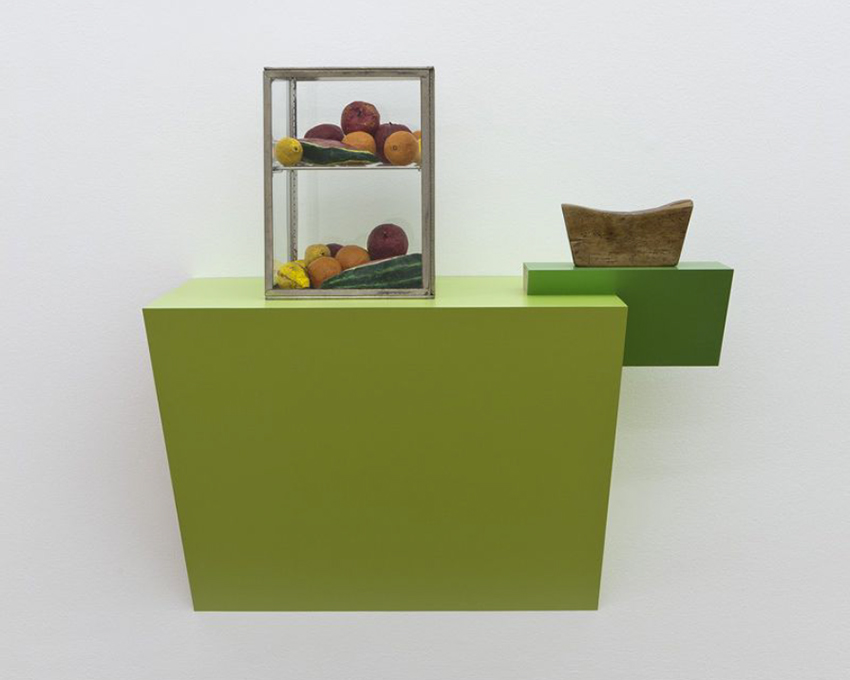 Back in the 19th century, the exercise of composing a still life may have been to the discipline of the fine arts what a Chinese headrest was to the leisure of smoking in an opium den: both carried promises of wider visions, stylistic master plans for the artists who experimented their touch on a bowl of fruits, dreams for the intoxicated sleepers who laid their heads on the hard pillows. At least here is an analogy that lingers in the gallery’s vestibule, where the journey through Navy Legacy, Haim Steinbach’s second solo show at Laurent Godin, begins with avocado 1 (2012) – two dozens papier-mâché fruits in a glass vitrine, and an antique wooden headrest, arranged on a green shelf.

Next to this incongruous display is a massive, angled white rampart, Untitled (leaning wall) (2012), which obstructs the narrow lobby, leaving just enough room on its right side for visitors to pass clumsily through. Still standing at the doorway, if you bend your head slightly over the Chinese pillow, you’ll notice on the left of the obstacle the final part of an enlarged wall text, which reads ‘ants’ in emboldened black. The rest of it is concealed, the sightline blocked by the architectural intervention.

So you have to lower your body and playfully make your way under the leaning wall to access the main space of the gallery’s first floor, and the bigger picture. While the complete phrase – No Elephants (2002) – is fully apprehensible on the other side of the passage, the idiom “an elephant in the room” comes to mind. That said, the unsuspected transition from the miniature (ants) to the mammoth informs not only the transition from the foyer to the white cube, but also the overall concept of the show. Indeed, according to the artist, the navy is metonymic for the broader ocean, and his entire exhibition is structured via extreme and whimsical scalar leaps, whether created by the formal correspondences between the artworks or by your imagination. Untitled (ball) (2012), an enormous and coarse papier-mâché sphere that almost fills the main room from floor to ceiling, dialogues with seven bocce balls and the round fists of a Hulk figurine arrayed on a yellow shelf, Untitled (7 bocci balls, Hulk) (2012), as well as a Lego toy, Cole’s tread assault (2012), a midget ninja vehicle locked inside a glass box.

While these three last compositions are a collection of items any child would fancy for a game of make-believe, Steinbach has been known since the late 1970s for gleaning – from markets, from relatives – diverse curiosities that he later precisely, yet puzzlingly redistributes within display devices of his own design. His cabinets of wonders, if you will, are constellations of heterogeneous finds: each and every one of them, whether familiar or odd, having the power to trigger your memory like Proust’s evocative madeleine.

As the exhibition continues in the basement with canonical status (2012), another shelf supporting an eighth bocce ball with two watering cans, and Prototype for a Gate Valve (2011), a plastic miniaturized replica of a mastodon vertebra in a glass bell jar, a final phrase on a framed sheet wonderfully resumes the artist’s poetics: tant qu’il y aura des petits creux (2012). The expression, literally ‘as long as there will be little hollows’, stands for the small cravings of a peckish child who is always up for one more treat. In other words, memory and imagination, since they’re constantly being sparked, are never nearly close to being replete.