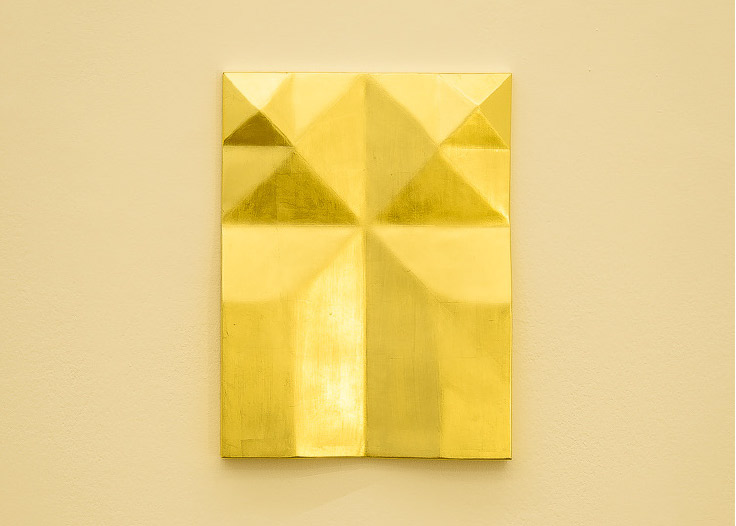 Starting from the innocent, yet also nihilist, pastime of making and unmaking paper planes, Gonzalo Lebrija’s fourth show at Laurent Godin has leisure, power and postmodern spleen at its core. Unfolded presents us with a minimalist ensemble of four paper works, six wooden panels covered with gold leaf, a silver sculpture and an 18-minute video loop, Éxodo (Aeroplane Competition) (2001; all other works 2015). As is often the case with the Mexican artist, the gesture prevails and gives all the works, even the static ones, a performative dimension.

In fact, the origin of Unfolded is a paper-plane contest: specifically, the happening documented in Éxodo, which Lebrija organised in March 2001. At the time, he was working in a studio on the top floor of the Condominio Guadalajara, a 26-storey building that was then the highest in Guadalajara. He had a habit of throwing paper planes through the window and watching them land 105 metres below. Small law firms occupied the majority of the edifice, giving the Condominio “sort of a bureaucratic vibe” that, Lebrija told me, he “could sense every day by using the same elevator that stopped at every floor”. So he decided to skyjack the building, if you will, and to do so he invited all the lawyers to join him on the top floor and play with paper planes instead of the law.

The video presented in the exhibition, a shortened version of the performance, documents it from street level: paper planes are thrown from the top of the Condominio and fly down to the ground. Frankly, given the camera position and scenery, the first thought I had while watching Éxodo was of the news footage of victims jumping from the World Trade Center. Considering 9/11 happened later that year, the rather disturbing spectacle offered in this video is just coincidence; or twisted fate. In other circumstances, or from another camera angle, it could just as well have reminded me of King Kong. In any case, Lebrija’s intent was to mock the absurdity of bureaucracies and corporate power.

Indeed, once you’re done playfully trying to figure out the different shapes of the erstwhile paper planes, you may observe that the intricate lines and angles of the folds render geometric compositions resembling the pyramidal structures of organisation charts; whereas the gold leaf applied to the wooden panels, like Christian icons, leads the imagination straight to the realm of the sacred. This is how, in Lebrija’s show, the notions of power and cult mingle to suggest mysterious hierarchies, the referent of which symbolically hides in the futility of the paper plane, and which brings us to the last piece on display.

Installed at the entrance of the gallery, Silver Lamento is a small sculpture of a standing man wearing a suit, right arm and head leaning against the wall, as if frozen in a state of deep melancholy. Lebrija has produced many variations of this figurine since 2008, this one melted out of silver objects gleaned from flea markets. According to him, it represents the lamentation of the postmodern man left with no God to worship and no other choice than to turn his back to the world. This is the embodiment of Lebrija’s postmodern spleen.