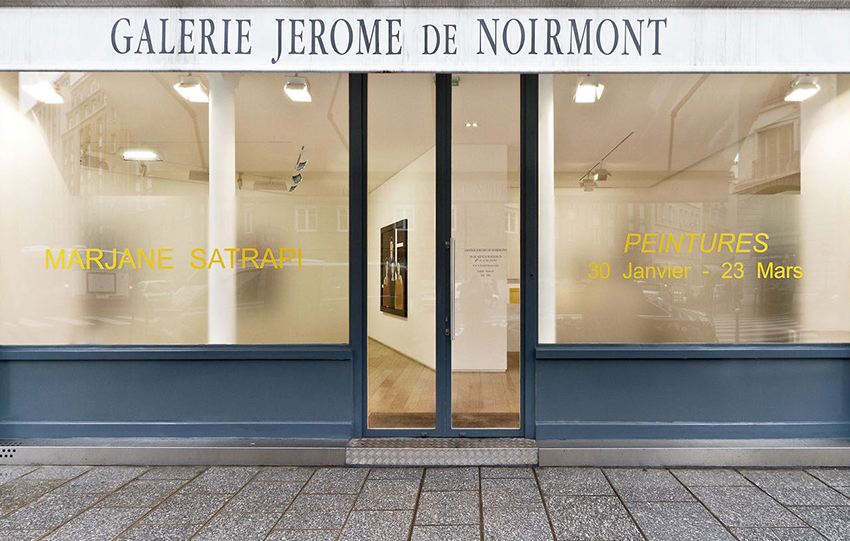 The unfavorable political, economic and social context in France today, along with the unhealthy ideological climate and stifling tax burden, compromises any prospect of a future art market in France and alters any enthusiasm as well as any entrepreneurial spirit! (Sic)

Announcing completely out of the blue the imminent closure of their gallery, the page-long letter (doubled via email) from the renowned couple of French art dealers Jérôme and Emmanuelle de Noirmont, which was received concomitantly by all their followers and friends on last March 21st, caused much surprise and huge turmoil among the Parisian art scene: “we have taken a carefully thought out, personal decision to put an end to the activity of the gallery at the end of Marjane Satrapi’s exhibition on March 23.” Two days later truly, after nearly 20 years of assuredly successful business and at the end of the said show—for the record 21 paintings, which entirely sold out in a few hours a month earlier—, the Noirmont did permanently drop their commercial curtain avenue Matignon next to the Champs-Élysées. If you wonder though, they’re not literally taking French leave since their company Art & Confrontation, which they created back in 1994 parallel to the gallery, will continue to exist for projects that have yet to be determined. Still, their precipitate retreat from the art business felt, just a week before the opening of 2013 Art Paris Art Fair at Grand Palais, as if the sky had finally fell on us.

At a time when the delirious yet symbolic 75 percent millionaire tax or the possible inclusion of artworks in wealth tax kept on hitting the daily headlines (and tempting potentially loaded collectors to flee country for better horizons), the French press was quick to spread the Noirmont’ news and the alarm quoting their missive like the voice of doom, especially the passage censuring the anti-entrepreneurial complexion of current national politics. That said, it is here absolutely necessary to precise once and for all that the couple’s decision was not in the least due to any immediate (or even remote) threat of bankruptcy. On the contrary, financially speaking, their gallery was doing very well representing a limited yet very keen catalogue of 15 artists any rival would be envious of—no less that Keith Haring’s estate in France, but also internationally acclaimed Pierre et Gilles, Jeff Koons, Shirin Neshat, and Fabrice Hyber among others, as well as younger talents such as Benjamin Sabatier and Yi Zhou. All the artists were of course informed of the Noirmont’s irrevocable decision prior to the public, around mid-February, while the now ex-gallerists are currently assisting them in finding new art dealers and vitrines in France or abroad, suitably. So what really went through their heads?

While her husband was away in Newcastle for the opening of Hyber’s exhibition Raw Materials at the Centre for Contemporary Art, and after shutting up boutique, Emmanuelle de Noirmont told me that for the past three years, they actually had been looking forward to larger premises and more artists to defend. As their letter pointed out, “the future appears to be in certain specialized niches for simple structure galleries, and in the branding of mega-galleries, with several international locations.” Since they weren’t interested in leaving France, their plan was crystal clear. In order “to continue to ambitiously serve the artists in this increased competition,” they had to extensively grow their business here in Paris. But the 2012 election of a socialist government altogether dissuaded them to take such a risky step and took away their desire to race: “surfing the wave and keeping the gallery in its current form would ultimately be a disservice to the artists.”

Now, caught between a rock and a hard place, what they didn’t explicitly communicate in their letter but Emmanuelle de Noirmont was kind enough to share with me is their strong desire to find an alternative to the rush for always-bigger money. Indeed, she and her husband deplore the ‘glamorisation’ of their profession to the excess that nowadays, the monetary weight tends to overtake the ‘humane’ value of the artists’ works. So if their personal decision to shutter their business could be quite damageable to the Parisian artscape within the rougher and rougher competition that occurs in other marketplaces (though in case it’s still some kind of a hot topic, aren’t you aware by now that conservative Paris is mostly relying on its art history rather than gambling on the new?), at least their intention seems noble: “our future commitments will always put art and contemporary creation at the heart of a social project drawing new paths through focused actions, both professional and charitable.” The Noirmont will disclose more on those by the end of the year.