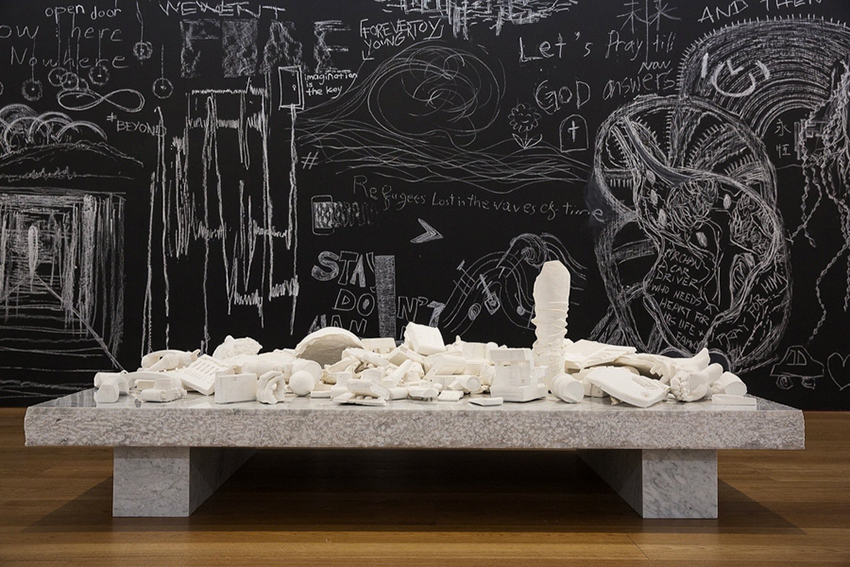 Following Daniel Arsham’s two previous solo shows at Galerie Perrotin, Paris and Hong Kong – “The Future is Always Now” and “#FUTUREARCHIVE” in 2014 and 2013, respectively – this new exhibition furthers the artist’s current exploration of geological materials that he began using four years ago to give a concrete body to his concept of “Fictional Archeology”. In fact, his travels to Easter Island in 2011, where he spent some time observing archeologists at work in a dig site, provided the creative kernel for this ongoing series. While the archeologists there were pulling past artifacts out of the ground, Arsham came to understand that archeology was also, in a way, a work of fiction. Archeologists need to invent – at least in part – a story to reconstruct a plausible truth for their discoveries. Yet who knows for certain what really happened?

Whatever may have been, storytelling or the account of historical anecdotes, whether true or false, is not what ultimately inspired Daniel Arsham per se. Rather, the artist is interested in infusing his own work with the fictional dimension of archeology. He would like us to imagine that we could travel to the future and look back at his cast relics of the present from a dislocated, curious point of view. For his sculptures of contemporary human figures and modern artifacts to convey this mysterious archeological aura, they must appear as if they really had been buried in the ground for a number of years before being excavated, which the use of geological materials – here mainly selenite, volcanic ash, chalk, and sand – allowed the artist to tangibly and successfully achieve without employing the artificial means of a trompe l’oeil painterly effect. Indeed, the earthen materials appear within his molds the exact same way that they would in nature, which strengthens their believable authenticity. After all, how does the saying go: from dust you were made, and to dust you will return?

Archetypal postures of classical sculpture, as well as images and plaster casts of Pompeian victims, who were solidified in ash after the eruption of Mount Vesuvius in 79 AD, inspired the ensemble of five human figures and body parts that Daniel Arsham created in selenite and volcanic ash (all 2015). Among them, The Dying Gaul Revisited is a reactualization of Galata morente, the Roman marble copy of a lost Hellenistic statue (circa 230 BC), which depicts with great realism the bare and prostrate body of a wounded Gaulish warrior down on his shield. Forever crystallized in a position halfway between falling down and rising up, Daniel Arsham’s version is the latter-day interpretation of The Dying Gaul – cast wearing contemporary clothing. Crucial sections of his body are not only eroded but actually missing, specifically the knee and the forearm, on which the figure nonetheless appears to be leaning. This puts the overall composition under the stress of a palpable tension in terms of balance. In fact, Daniel Arsham has always been fascinated with the diagrams one can find below reassembled sculptures in museums, which show the portions of the figures that were found and also those that were reconstructed by conservators. To add to the mystery of his fictional archeology, he intentionally leaves these kinds of breaks within his final casts.

Next to this sculptural ensemble, Daniel Arsham covers an entire wall with black chalkboard paint. In front of it, casts made out of chalk representing body parts, such as hands and faces, as well as various modern artifacts ranging from cameras to telephones and, as a whole, related to communication, were left on a pedestal at the viewer’s disposal. Visitors are thus invited to grab these objects in order to write or draw to their liking on the wall. In the process of mark-making, the casts in chalk will progressively erode away throughout the length of the show, which further epitomizes Daniel Arsham’s idea that archeological fiction can only skim through the truth; in this case, the acts of writing and drawing even destroy the earthen evidence or the artist’s future relics of the present. Displayed on its own in the following room is a recent installation consisting of similar casts of modern artifacts that the artist made out of sand in collaboration with the students of the School of Arts, Singapore (SOTA), where it was first exhibited in 2013. Among its iconic or recognizable trivia, the gritty ensemble includes for instance cassette tapes, joysticks, keyboards, and calculators, which are laid out all over a large white table, almost as if an archeologist had just unearthed them.

Finally, three gouache paintings on mylar can be viewed in the side room of the gallery (all 2013). Each depicts in greyish tones a pair of white beams rising out of a pound in the middle of an encircling forest. These abstract architectural renderings, if you will, fall somewhere in between a state of ruin and a process of construction, for it is impossible to discern whether they’re falling apart or being built. They look like they could have a function but we don’t quite know what that is, and for that matter, they impose themselves as purely timeless.V