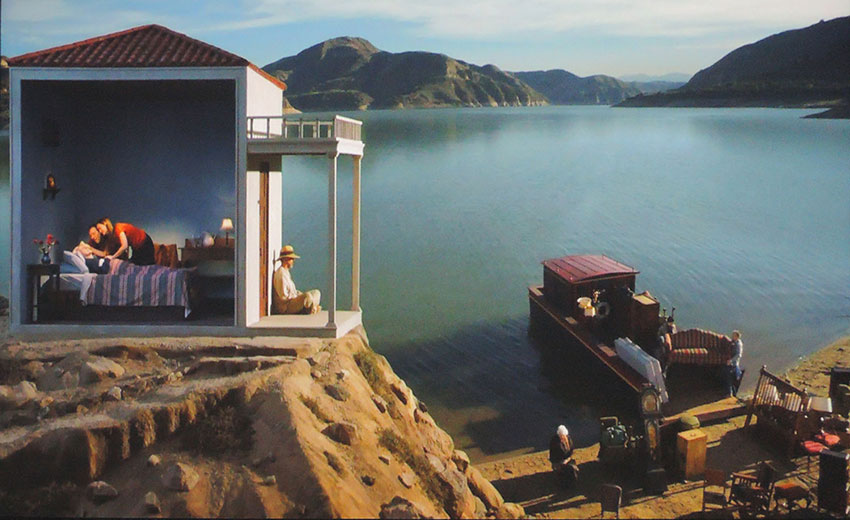 The first presentation of video art at the Grand Palais and Bill Viola’s first retrospective in France, this exhibition is also the American artist’s largest so far, involving 20 installations and almost 50 screens. From his video baptism (so to speak), The Reflecting Pool (1977–9) – one of his earliest videotapes and first uses of chroma-key special effects, in which Viola’s suspended body above water slowly disintegrates while a theatre of shadows on the pool’s surface diverts our attention – to the new multiscreen installation The Dreamers (2013), which portrays seven sleeping performers submerged in water, Viola manages, once again, to plunge his viewers/flâneurs into a state of rapt contemplation.

If the artist has been so successful over the past four decades in immersing his audience into his art, it is not just because of the breathtaking complexion of his moving images. It is first and foremost because his field, which goes beyond video towards approaching what he calls the ‘universal language of mankind’, reflects questions that are profoundly humane. During the opening, Viola described his practice as ‘a journey through life with the knowledge that we will not live forever’, while ‘humanity really consists of three conditions: the unborn and the dead, which are both eternal, and in-between the living, which is temporary – all of us at this moment in time, which is the thing that we work with’. And that is exactly what video, the medium of instant feedback, has allowed him to ‘sculpt’ (he says) or make manifest since the beginning of his career.

Of course, the spectator hasn’t always the time to decipher every single frame. In The Sleep of Reason (1988), one has to face the unpredictable attacks of nightmarish images on the walls of a room intermittently plunged into darkness (among others, the flashing wings of an owl after Goya’s The Sleep of Reason Produces Monsters, in his etching series Los Caprichos, 1797–8), while The Quintet of the Astonished (2000) contrarily demands an exemplary concentration to sense the changes of expression portrayed by five actors, the extreme slow motion applied to Viola’s video footage bringing it close to the stasis of painting.

That said, Viola’s archetypal fictions (drowning, sleeping, crossing paths or simply being-in-the-world, being born and passing) always happen to a body, whether it his own (as in most of his early pieces), or that of a family member – in Heaven and Earth (1992), two monitors facing each other at the midpoint of a vertical wooden beam, the impossible dialogue between the artist’s newborn and his grandmother, who had passed at the time, is made perceptible through their reflections onto each other’s screens – or a performer’s, as in all Viola’s productions since the late 1990s. And so deep identification and empathy operate even though sometimes the human figure can barely be seen: in the videotapes Chott el-Djerid (A Portrait in Light and Heat) (1979) and, to a lesser extent, Walking on the Edge and The Encounter (both 2012), people filmed across a great distance in the desert are so distorted by the heat that they appear like mirages, or the hallucinations of the landscape itself.

Finally, the bodies that penetrate Viola’s pictorial world are almost systematically subjected to the transformative qualities of natural elements – primarily water, as in the diptych Surrender (2001), which portrays the reflections of two actors tearing up, plunging and dissolving onto the liquid surface – and the video devices or montages the artist has thoughtfully set up: the split screen of The Voyage, for example, one of five panels in the multiprojection installation Going Forth By Day (2002), in which an old man on his deathbed gains the power of ubiquity as he suddenly appears, while taking his last breath, both in and outside his house, joining his already deceased wife for their final journey on a boat. Though most viewers at this very instant are distracted by the disastrous flood occurring on another panel, The Deluge, leaving them completely oblivious of the miraculous split, there my heart melts, discreetly, for this is simply beautiful.