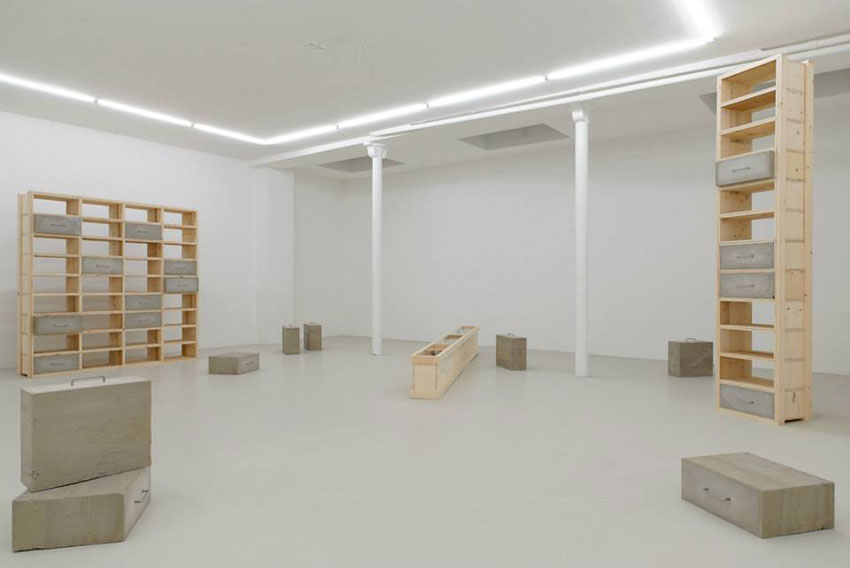 Standing at the crossroads of Concrete art and design, as well as masonry and carpentry, the works displayed in Benjamin Sabatier’s first solo show at Jousse Entreprise were inspired by a visit to Sheffield’s Park Hill housing estate, back in 2012, and his ensuing discovery of British Brutalist architecture, especially its formwork building technique and exposed concrete frames. The artist having been previously represented by Jérôme de Noirmont, Philippe Jousse opted to reintroduce his latest recruit to the public via a strong concept-driven show. Gathered within ten ensembles of serial sculptures, Form Work I to VII and Valise I to III (all works 2014), nearly 50 rough concrete rectangular modules – each about 17,1 H x 19,7 W x 7,9 D inches for 130 pounds and equipped with an (ornamental) aluminium handle to suggest transportability (don’t bother trying to move one, though: you’d break said handle if not your wrist while the object won’t budge) – make indeed a solid point.

Besides Valise I, which was the prototype for both series, all the works are arrayed in pairs or bigger groups, some arranged like materially impractical drawers in the wooden containers that served as their formworks, others scattered on the gallery’s floor and resembling orphaned suitcases without their shutters on (you can actually see the texture of the boards used as casts on the surface of these concrete blocks, an approach that was often a part of brutalist aesthetics). In the case of Form Work IV, V and VI, the modular constructions take on much larger dimensions, the wooden shuttering moulds being piled up so as to shape and likely serve as usable bookcases (minus of course the areas occupied by the poured-concrete units). This analogy is not without significance – Jousse’s other gallery space in Paris is after all dedicated to architect-designed furniture. But this is also an opportunity to quote real royalty (the first time I’ve done so), thinking of the words used by Prince Charles in the 1988 BBC documentary A Vision of Britain to describe the Birmingham Central Library, designed by architect John Madin in the Brutalist style: “It looks like a place where books are incinerated, not kept.” In this light, to stack or not to stack books in Sabatier’s artistic shelves is left to the collector’s sensibility.

That said, what the artist retains here from Concretism, as theorised by De Stijl founder Theo van Doesburg in his 1930 Manifesto of Concrete Art (which shares some of the concerns of the later Brutalism), is the following principle: ‘construction must be simple and visually controllable’. In Sabatier’s understanding, as he told me during the opening: “The structure and materials are apparent, rough; a gesture that within brutalist logics is not only economical but also political and social. As with all my artworks, the mode of fabrication and components are completely visible to the users.” In his aesthetics, the absolute lucidity of the modular technique he employs (here, simply pouring concrete into formworks and piling up wooden cases) and the systematic use of humble materials that are easily purchased or even gleaned (cans, blister packs and tins of paint being among the most recurrent in his previous works) are meant to perpetuate the DIY culture of 1960s. In this regard, his ongoing series of sculptures Kits IBK (2002-), which are sold with a user manual to be built by the collector, speaks for itself. Sabatier’s art is essentially processual and moreover a concrete invitation for the viewer to become, in turn, a producer of art.